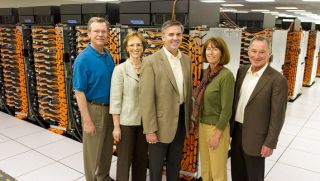 The Sequoia - not exactly portable

The US has reclaimed its crown as home to the world's fastest supercomputer thanks to the IBM Sequoia.

Two years ago, China gunned for and got that number one spot, while Japan's Fujitsu-made K Computer then overtook.

But, never a country to do things by halves, the US's Sequoia has pushed the K Computer into second - it is 1.55 times faster than the Fujitsu-made computer, and uses more than 1.5 million processors.

Rather puts your quad-core smartphone to shame, eh? Well, at least you don't need a bunker of some kind to house your Android: like its namesake, the Sequoia is BIG.

The IBM Sequoia is a computational beast, able to carry out the equivalent of 320 years worth of 6.7 billion people's hand-calculated work in just one hour.

Despite its size and power, the Sequoia is one of the most energy efficient supercomputers in the top ten.

It will be used by the US Department of Energy to run simulations of nuclear weapons tests so they don't actually have to be tested underground.