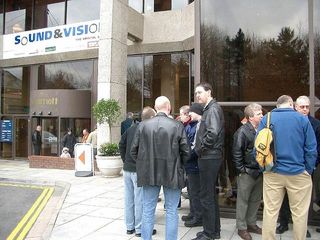 The mood at the Sound and Vision Show was buoyant, despite the challenging conditions facing the UK hi-fi industry

The annual Sound and Vision Show at Bristol’s Marriot hotel each February is undoubtedly the most important hi-fi show in the UK calendar.

This year, the Bristol show celebrated its 21st birthday, showcasing 192 brands to the public.

State of the hi-fi market

The mood at the Sound and Vision Show was buoyant, despite the challenging conditions facing the UK hi-fi industry. If the UK is any indication, the hi-fi market is noticeably shifting to favour high-priced, high-end audio gear at the expense of mid-range and budget systems.

Increasingly, there’s little gain to be had in catering for the middle ground. ‘Serious’ audiophiles will spend ‘serious’ money on luxurious, big-name brands. At the other end of the scale, high-capacity MP3 players and iPod docks have all but replaced entry-level audio gear. It’s hobbyist vs. convenience.

Digital audio and wireless streaming were two key trends that gained traction at this year’s Sound and Vision Show.

Rubbing shoulders with hi-fi stalwarts such as Meridian and Cyrus were streaming media companies such as Sonos and Squeezebox. The latter pulled in the crowds with its innovative Squeezebox Duet system, complete with iPod-like remote control.

Naim managed to raise a few eyebrows as well, using an iTunes-equipped laptop (in addition to one of its own CD players) to demonstrate the new SuperNait integrated amp.

Respected hi-fi brands such as Denon, Onkyo and Arcam all now build MP3 functionality into key products. It’s a measure of the credibility that digital audio players, especially Apple’s iPods, now have in the hi-fi industry.

Back at the high-end, the more conservative digital expert, Meridian, continued to fly the flag for hi-fi traditionalists. It launched its new £7,195 flagship 808.2 Signature Reference CD player to drooling audiences.

Sanctuary was available too in the Chord Electronics room, where the £13,345 Red Reference CD player was on demo.

However, despite the trend for ‘high-end’ audio, the UK’s most significant high-end distributor, Absolute Sounds (Krell, Audio Research etc), was not exhibiting at Bristol. Neither was Symmetry (Mark Levinson, Ayre, Esoteric) or UKD (Pathos, Graff, Unison Research).

One surprise of the show was the public’s apparent delight that the HD DVD/Blu-ray format war was finally over. Experts in the Sony room were on hand to answer questions about Blu-ray and assist those eager consumers who’d been delaying buying an HD video player until the battle had played out.

Although the consensus was that there were less exhibitors at Bristol this year, numbers through the doors remained high. Crucially, the crowds harboured a number of ‘hardcore’ show-goers who were genuinely interested in what was on offer.

Naim’s Doug Graham summed up the Sound and Vision Show’s significance: “Bristol is now, without doubt, the most influential show in the diary. Attendees certainly took the opportunity to ‘meet the manufacturer’ and throughout the weekend we had lively debate during our demonstrations”.