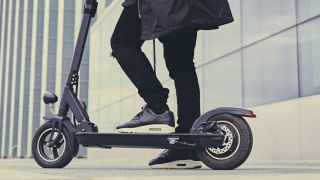 Electric scooters are a relatively new way to travel, and the law is still catching up with the technology.

Wherever you live, it’s unlikely that you’ll be allowed to ride on pavements or sidewalks. Electric scooters can typically reach speeds up 25mph, which makes them dangerous on walkways shared with pedestrians.

We believe that all the information in this guide is correct at the time of writing, but always check with your local authorities to make sure you’re clear on the law regarding electric scooters where you are.

Are electric scooters legal in the United States? It depends exactly where you live, but probably. According to the National Highway Traffic Safety Administration (NHTSA), “scooters lacking seats that are operated in a stand-up mode” don’t qualify as motor vehicles, which means they aren’t legislated at a national level. Instead, it’s up to city authorities to decide what to do when a cocky startup dumps a fleet of scooters on its streets (as Bird did in Los Angeles in 2018).

Authorities in LA weren’t too pleased and ordered the company to put its toys away immediately. However the city has since relaxed its stance and approved a pilot program for dockless vehicles.

May other cities have followed suit – not legalizing electric scooters outright, but beginning pilot schemes to find out how well the little vehicles play with others on the streets.

New York looks poised to legalize electric bikes and scooters capable of speeds up to 20mph, but the island of Manhattan has explicitly opted out on the grounds that its streets are crowded enough already.

In Canada, the rules on electric scooters vary by province. They aren’t recognized as a type of motor vehicle by current laws in Alberta, British Columbia or Ontario, which means they can only be ridden legally on privately owned land, and sometimes on pavements.

However, there are exceptions – Calgary is currently in the middle of a two-year pilot project, which could result in the city’s laws being reviewed to make electric bikes and scooters road legal. A similar pilot is also underway in Quebec with strict rules regarding driver age, training and equipment compliance. Falling foul of the law will result in a substantial fine, so take care.

Are electric scooters legal in Europe? For the most part, year – or they will be very soon – unless you happen to live in the United Kingdom. We’ve covered a handful of nations, but check with your national transport authority if you’re based elsewhere.

Electric scooters are a popular way to get around in France, but the country’s transport minister has announced that it will be illegal to ride electric scooters on pavements from September 2019. Anyone scooting along the pavement after that date will face a fine of €135 (about $150, £120, AU$220). Electric scooters will still be legal to ride on the road, or in cycle lanes.

At the time of writing, Germany has just legalized electric scooters on public roads (riding on pavements will only be allowed in ‘exceptional cases’) provided the rider is over 14 years old, is wearing a helmet, and doesn’t exceed 20kmph (12.4mph). It hasn’t been a universally popular decision, but at GreenTech festival in Berlin, TechRadar saw a raft of German startups desperate to spread their pay-to-ride scooters throughout their home country.

Electric scooters have recently been legalized in Italy, and sharing schemes in Rome, Florence and Pisa makes them a popular choice for tourists.

In the UK it's illegal to ride electric scooters on public footpaths, roads and bike lanes, but that could soon change. A new consultation will look at issues of safety (such as whether helmets should be required) and regulation, and will be followed by trials in several cities.

In Japan, if an electric scooter is capable of speeds over 9kph (which they pretty much all are), it’s classed as a motor vehicle and therefore needs a license, registration, turn signals, and everything else that you’d need on a motorbike or moped. Without those, unless you’re riding on privately owned land, electric scooters are illegal. Traffic violations are taken very seriously; breaking the law can mean a hefty fine, points on any driving license you already own (or one you apply for in the future), and even time in jail.

Electric scooters are legal to ride in India without tax and insurance, provided their motors are under 250W and their maximum speed is no higher than 25kmph.

China has just tightened its laws on e-bikes, requiring owners to register their bikes and apply for plates. There are also new power and weight guidelines. However, the rules don't mention electric scooters, which are banned on roads in most cities, including Shanghai, where they have been involved in several serious accidents.

Rules in the United Arab Emirates vary from city to city, but while Dubai’s transport authority has banned scooter rental companies like Lime and Bird on safety grounds, it’s legal to own and scoot about on one that’s privately owned.

In Australia, electric scooter laws vary from state to state. Brisbane was the first Australian city to trial Lime scooters, which can only be ridden on pavements (not cycle lanes or roads) and require a helmet. Lime's permit was extended into 2019, but after several accidents, its future in Australia looks less bright.

Elsewhere in Queensland, scooters like Lime's are illegal. The Queensland Government website states that electric scooters must have an electric motor no more powerful than 200W, and a maximum speed of 10kmph. If Lime scooters are found outside the Brisbane trial zone, they're duly confiscated by police.

Laws in Victoria are similar, but a little more permissive. Any scooters that are too fast or powerful won't be confiscated, but riders must own a motorbike license and the scooter must be registered with the authorities.

The rules in New South Wales are the same as the United Kingdom (ride on private land, or not at all), but following electric bike trials in Sydney, e-scooters might make their first appearance soon.

In New Zealand, in order to be classed as an electric scooter, "the wheels must not exceed 355mm and the motor must have a maximum power output not exceeding 300W". Provided those conditions are met, the scooter isn't classed as a motor vehicle, and you can happily scoot along without a license.

Electric scooters are allowed on footpaths or roads, but not in designated cycle lanes. You're not required to wear a helmet, but you are obliged to give way to pedestrians, ride carefully, and generally not make a nuisance of yourself.