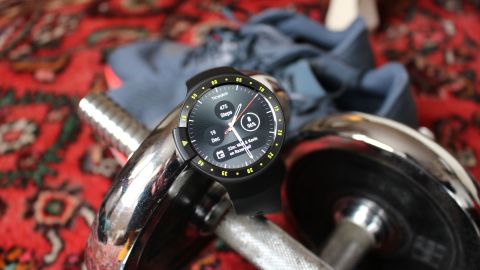 The Ticwatch S uses an Mediatek MT2601, 1.2GHz dual-core chipset, paired with 512MB of RAM. Those are very similar specs to the LG Watch Style, just swapping out the Snapdragon 2100 chip.

Qualcomm's Snapdragon chip is more commonly used in wearables, powering not only the LG Watch series, but also the Asus ZenWatch 3, and the Huawei Watch 2.

We were a little nervous that the cheapness of the Ticwatch was because of using a cheap chipset, but were impressed with its processing potential.

A single press of the button on the side brings up the menu that allows you to select from a number of pre-installed apps, and those chosen by you. The opening of the menu is swift, and scrolling through menu options is smooth and well animated.

The Ticwatch S runs on Android Wear 2 and Google's operating system is beautifully integrated in the smartwatch. This was something of a concern, as this is Mobvoi's first foray into using the OS, but it’s a shrewd move, and well executed.

One of the most impressive things about the watch, and a feature we found ourselves using a great deal is the Google Assistant. Mobvoi specialises in human-machine interaction and voice recognition so it shouldn't be too much of a surprise that its voice recognition is good, but it is really good.

A long hold of the button, and Google Assistant pops up asking how it can help. We used it for trivia searches, sending WhatsApp messages, setting timers, and more. Its accuracy of the words that we were saying was one of the best voice recognition experiences that we’ve had.

That's not to say that voice is the only way to input text on the Ticwatch. When you get a message notification, the watch pulses a slight vibration, and you can read a preview of the message, tap in to see the full message, and then reply using a tiny keyboard.

The each letter on the keyboard is half the size of a fingertip at max, so we were pleasantly surprised when typing was actually quite accurate. What we ended up doing most of the time was using the brilliant Android feature Gesture Typing.

Gesture typing allows you to type by keeping your finger in contact with the screen and tracing the path of the word on the keyboard. Using machine learning, the keyboard will generate the word it thinks you want to use and it's very accurate.

Across the other apps, the 'smaller but similar' theme continues, giving you a pared back version of all your favorite apps; there's Uber, Spotify, Citymapper, and many many more. And for the most part they work as well as you'd want.

You don't get full control, so with Spotify for example, you're able to select a playlist from recently listened to, but not search or select specific tracks.

Similarly with Citymapper, it allows you to display your journey on the watch, but you'll need to actually enter the address and plan the route on your phone.

These are software rather than hardware issues and so could improve over time, and as it's a limit of Android Wear 2, if this is a problem for you, it's going to be a problem no matter what Android Wear device you end up going for.

One final thing that's worth mentioning for this section is that the gestural controls on the Ticwatch S aren't quite as precise as we'd have liked.

It does the usual 'turn wrist to wake' that is fairly standard on smartwatches and fitness trackers nowadays, and does have the option for gestural controls, but in our experience it required a few flicks of the wrist before actually waking.

As an Android Wear device it'll come as no surprise that the Ticwatch S will work best with Android devices, but that doesn't mean it won't work with an iPhone.

As long as you've running iOS 8 (or newer) on your iPhone, or an Android Device running 4.3 or later you'll be good to go.

There will be certain apps that exist within the Google ecosystem (Gmail, Google Calendar, Google Assistant) that you’ll potentially be more familiar with if you are already an Android user that will make the transition to using Android Wear pretty seamless.

Apple's ecosystem will be a little less accessible, so you'll have to iMessage on your phone rather than through the phone which is one of the most appealing features of a smartwatch.

You'll be able to make and receive calls from the Ticwatch as long as it's paired with your phone. The sound quality isn't good enough that you'd want to phone home to your grandma on it, but it's definitely good enough for a quick 'I'm five minutes away, order for me' type conversation.

With the move towards 4G connected smartwatches that can operate without a phone, it's a little disappointing not to see LTE connectivity available here. We also missed an NFC feature, meaning no contactless payments using Android Pay.

These are undoubtedly the trade-offs for having such a cheap watch, but being able to go out for a run, make a call, stream music, and pay for a bottle of water with only a wearable on your wrist is one of the most appealing things about where this technology is heading.

Given that it's the sporty model of the Ticwatch, we were expecting big things from the Ticwatch S when it came to fitness, and the results were a mixed bag.

In terms of app support for fitness, the Android Wear ecosystem really holds its own.

There is a dedicated Ticwatch app that you’ll be able to download onto your phone which will give you a very basic health center, that shows your time walking, time active, and amount of active hours you’ve had that day.

It definitely feels under-developed, but we think that it's actually pretty clever not to sink too much time and effort here as the other apps available are already so good.

Google's own Fit app is excellent, keeping track of your workouts, goals, weight, and more. What's more, it has a vast range of compatible apps that feed information into it, that include nutrition apps, running apps, sleep tracking, hydration apps, and even ovulation trackers.

What this means is that if you have a specific area of your fitness or health that you want to focus on, you can download the corresponding app, and tailor your fitness experience to your needs.

We downloaded the Runtastic app both on our phone and on the Ticwatch S to see how they worked.

Given that the Ticwatch has onboard GPS capabilities, you can choose to run with or without your phone, which makes a massive difference if you're going on a long run and don't fancy having a phone strapped to your arm or slapping against your thigh with every step.

GPS tracking is very accurate, so if that's important to you, it would seem the slight price increase from the Ticwatch E would be worth it for you.

What that means is that once you've finished your run, you can view maps of your run, and see important information like how you help pace across your run, your heart rate versus elevation, and more.

The heart rate tracking is not as precise as we've experienced in dedicated fitness trackers like the Polar M430, meaning if you want to track swift changes in heart rate (if you're doing interval training) you'll probably be left wanting but for general heart rate zone monitoring and resting heart rate it's more than enough.

What is slightly disappointing is that for a 'sport' watch, the Ticwatch S doesn't support advanced fitness features like VO2 Max, which measures your fitness level through detecting how your body metabolizes oxygen, or proper waterproofing.

You'll find both of these things in the significantly cheaper Huawei Band 2 Pro.

The Ticwatch S has IP67 waterproofing which means it'll comfortably cope with getting a bit sweaty, and even light rain, but definitely isn't to be worn into a shower or in a swimming pool.

Considering how minor the differences between the E and S models, we would have liked the S to have been a little more advanced in its sports capabilities, even if that meant a slightly heftier price tag.