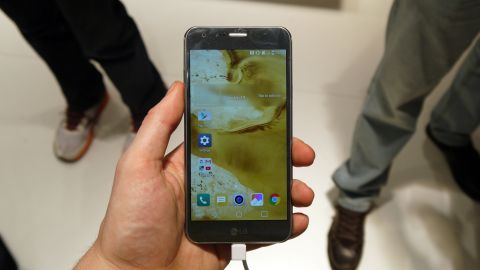 The LG X Cam looks to have one of the best cameras in the mid-tier. If LG can keep pricing reasonable I think it could be on to a winner.

The LG X Cam is one of two mid-range handsets launched by the South Korean firm at MWC 2016, and as the name suggests the big talking point here centers round this handset's camera.

I always like to see flagship features cascaded down the smartphone tiers, and with the X Cam inheriting the LG G5's camera smarts it lets it have a real USP in the crowded middle tier of the market.

Pricing is yet to be announced for the LG X Cam, and the release date is also not nailed down with LG saying it will debut in key markets in Asia, Europe and Latin America from March.

The X Cam's design is decidedly mid-range, with the all plastic body looking and feeling cheap, although it does feel solid and tapers to a 5.2mm thickness allowing it to fit nicely in the palm.

I got my hands on the grey (or as LG like to call it, Titan Silver) X Cam, but it will also be available in white, gold and pink gold.

The power/lock key is located on the right, with volume and the tray for a SIM card and microSD card on the left. The buttons are easy enough to reach, but they sit almost flush with the chassis and I found they could be a little tricky to find at times.

You'll be thankful for that microSD slot too, as the X Cam comes with 16GB of internal storage which can fill up fast if you really put the camera on the back to the test and download some intensive games.

Round the back there is a noticeable similarity between the X Cam and G5, with a large camera bump housing two sensors along with a flash and laser autofocus. There's no fingerprint sensors below on the LG X Cam though.

Back to the front and a full HD 5.2-inch display dominates the X Cam, giving you a nice big viewfinder for those double cameras on the rear. I found the screen to be bright and clear and colors were strong, although not as vibrant as Samsung's Super AMOLED displays.

On screen and the X Cam runs Android 6.0 Marshmallow, although LG has coated it in its own light UI. One of the major things LG has done here is remove the app tray - an occurrence which is happening all the more often, especially from Chinese manufacturers.

This could irk some Android fans, but LG's done a good job with its overlay and it feels fresh and clean. It also performed smoothly, and with an octa-core processor and 2GB of RAM under the hood there's more than enough power for most smartphone based activities.

Putting the focus back on the camera though, and on the back the main 13MP snapper is joined by a 5MP wide-angle lens allowing you to get more in your shots, although you will sacrifice image quality.

This helps the X Cam stand out from what is a rather bland middle market, and it offers something rather more interesting than standard cameraphones.

Fire up the camera app and it's easy to switch between the two lenses, with a nice zoom in, zoom out animation to let you know you've changed. And I can say that switching to the wide angle option definitely puts more in your shot.

Shutter speed was reasonable, and the images I snapped on the LG booth looked pretty good, but they're not as polished as those from the LG G5.

For those addicted to selfies, LG's included an 8MP front facing snapper too, with all the bells and whistles including beauty mode and gesture shutter. The latter allows you to hold your hand up and then make a fist to trigger a three second count down timer.

LG's also packed a 2,520mAh battery into the X Cam, although I'm wary that this phone could struggle to see out a full day on a single charge. A sizeable full HD display, punchy processor and feature which encourages you to take lots of photos could see the battery take a beating.

I'll reserve judgment on battery life for our full review though, where we'll put the LG X Cam through its paces.

The LG X Cam looks to have one of the best cameras in the middle of the market and as long as LG can keep the pricing reasonable I think it could be on to a winner here.

It's running the latest version of Android, there's expandable storage and while LG may have removed the app draw I found the interface was still pleasing.