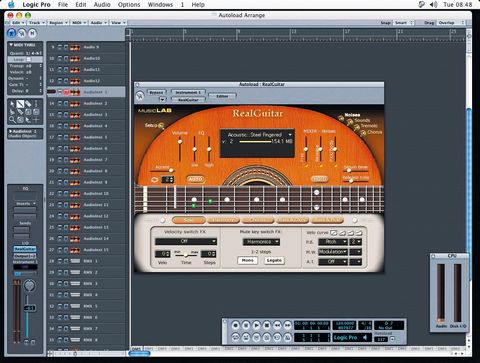 Even the subtle nuances of shifting finger positions are present

If you're after an authentic virtual guitar for your computer music studio, then look no further!

Steinberg's Virtual Guitarist can produce acoustic guitar strums, but these are limited to the app's on-board rhythm patterns. MusicLab's new sample-based creation, on the other hand, is designed to offer unprecedented control over the guitar sounds being played - right down to individual notes.

RealGuitar is a plug-in that can be used with a sequencer such as Logic, ProTools or Cubase. It imitates basic guitar techniques such as strumming, plucking, sliding, bending and muting, by employing standard MIDI keyboard and MIDI controllers.

It even recreates those natural extraneous sounds you get when you move your hand from one note or chord to the next.

To use this software to create realistic guitar parts, you must have a velocity-sensitive MIDI keyboard that will respond to different nuances in your playing.

You don't need a formidable virtuoso technique to bring RealGuitar to life, but it will help if you're fairly adept at handling a MIDI keyboard.

You'll also have to learn techniques in order to master specialised guitar effects such as slides, palm mutes, note bends and harmonics, but these are pretty straightforward - a little bit of time spent with this package soon pays dividends.

RealGuitar won't do guitar players out of a job, but it will prove useful for musicians who don't have a guitar or don't want to bother tuning and miking-up an instrument every time they want to do a recording. Cliff Douse