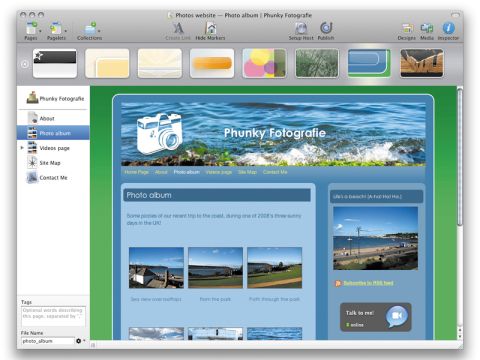 Highly usable, if restrictive in layout terms. Certainly worth considering for people wanting to get their site online quickly

Things sometimes come full circle. When we first started creating websites, the early WYSIWYG (What You See Is What You Get) tools were flickering into life – PageMill, FrontPage, and so on.

Unfortunately, they were rubbish, and so for years you either had to hand-code or plump for shockingly expensive software such as Dreamweaver. Now, a plethora of Mac-based WYSIWYG tools exists, from Apple's own iWeb and professionally oriented Softpress Freeway, to our favourite RapidWeaver.

Karelia Software's lesser-known Sandvox gained a runner-up position in 2007's Apple Design Awards ceremony, and the company boasts that it's a tool for "people who want to spend time developing their lives, not their websites". In practice, this means it's another drag-and-drop effort, based around a selection of built-in templates and widgets.

The templates run the usual gamut from idiosyncratic through to dull, with a reasonable selection being suitable for a wide range of websites.

Usefully, graphical banners for many of the designs can be switched using Sandvox's Inspector, although said banners cannot be repositioned, and the portion of your image that's used appears somewhat random.

The layouts are heavily locked down – you can't drag-and-drop page components around the place. Instead, you get headings and spacing where Sandbox deems appropriate. (It is possible to create new themes from scratch, although if you're into designing sites from the ground up this probably isn't the tool for you.)

Although these limitations appear restrictive, Sandvox is fine for a quick personal homepage, and the application certainly excels when it comes to speed. Photo albums and blogs are simple to deal with, and we were happy to find that text files (such as RTF or DOC) could be dumped on to Sandvox to get a head-start in adding content.

Along with pre-configured pages, Sandvox offers another innovation: Pagelets. These are essentially widgets, designed to live in each page's sidebar. Most Pagelets are geared towards the social web (Digg links, RSS, and so on), although text, images and a contact form are also available. Again, using Pagelets is simple, and they're good for rapidly adding common page components.

Publishing is also pretty straightforward. A well-designed sheet drops when Setup Host is clicked, and once you're done adding details, the Publish button uploads everything to your web space (via FTP or
WebDAV).

The sites themselves seem reasonably fast, and although the code isn't as tight as a professional designer might craft, it makes a decent stab at accessibility and web standards. That said, we did notice that with some of Sandvox's templates, odd gaps appear here and there on some pages and when using certain elements.

Overall, we were fairly impressed with Sandvox. It's a decent solution for home users (rather than professionals) and beats iWeb in several regards. However, while the standard version is nicely affordable, Sandvox Pro costs about the same as the superior RapidWeaver, and the only real extra is the ability to hack in custom code.

For users requiring an extra level of control, Realmac's application is a better bet. Note that our rating is for the standard version – we'd lop off a half-star for the more expensve Sandvox Pro.