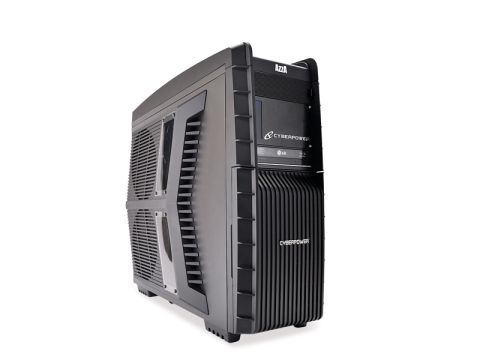 Great value if you're not fussy about screens and peripherals

We've seen systems sporting overclocked Core i7 2600K CPUs before. Some, like Dino PC's Evolution 2600K, clocked the chip all the way up to 5GHz. We approved.

Cyberpower is the latest to join the grossly overclocked 2600K club, the CPU in this system weighing in again at 5GHz. It's done it in style too, by water-cooling the chip so it stays well within safe temperatures at 100 per cent load.

Cyberpower's not breaking new ground, but the water cooling kit looks pretty impressive inside that case compared to the self-contained kits such as the Corsair H50.

The advantage this Cyberpower rig has over offerings like the Evolution 2600K and Palicomp's superlative Phoenix Hydro X is the inclusion of Intel's Z68 chipset. It's not a massive deal for gamers specifically, but Z68 has a number of features we wouldn't want to be without, given the choice.

One of those features is Smart Response. Right out of the box, the 30GB Kingston SSD is configured for use as a cache device for the 1TB hard disk, which improves boot times and read/write operations. It's a nice touch to see this rather laborious process taken care of by the system builder.

Sandy Bridge's impressive integrated graphics and video decoding engine are now on the menu at the same time as all that overclocking business. On that level, systems built around the H67 platform simply can't compete.

It's no great surprise to find Nvidia's GTX 580 occupying the PCI slot. System builds around £1,500 have favoured the card since its release, and rightly so. It's frankly overpowered for the current slew of DX11 titles, and offers some reassuring future-proofing to your machine. You only have to run the Unigine Heaven benchmark, which is full of more tessellation than a secondary school maths textbook, to observe how well it deals with cutting-edge rendering techniques.

It'd be nice to see a third party card with a better cooler rather than the stock GTX 580, but really that's a minor gripe in the grand scheme of things.

Here's a turn up for the books, though. For £1,500, it's bundled with a screen, keyboard and mouse. That's either a blessing or a curse for the Liquid i7 High; it takes the hassle away from buying everything separately but creates more potential for dissatisfaction with the parts that are included.

For the record, the LED backlit BenQ screen is a sensible choice. It's nothing fancy, but the clarity and colour balance are solid.

Few will take the capable Logitech wireless keyboard to task, but the mouse is too small and flimsy to use for gaming. It shapes up well compared to the exemplary Phoenix Hydro X in terms of performance and price, and borders on the ferocious Dino PC Evolution 2600K's territory. (And let's not forget that particular beast rocks a GTX 590 and costs £300 more.)

All in all, the advantages that this Cyberpower rig offers are sizeable – including a great CPU and memory performance, superb value and the benefi ts of the Z68 platform.