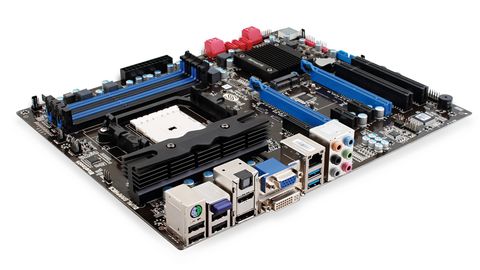 Our first taste of AMD's new Trinity platform came in the shape of the Asus F2A85-V Pro. Sapphire must hope we're sticking to the playground rule of metrics though, making this second one the best, and whatever ASRock board is sitting in the wings the one with the hairy chest.

There are the standard four DIMM slots supporting DDR3 up to 1,600MHz at standard settings and faster speeds via overclocking, five PCIe slots of varying speeds, four display outputs, seven SATA 6Gbps ports, a smattering of USB 3.0 ports and a dual BIOS setup, which is accessible via a two-way switch on the board.

Also sitting between the two PCIe 2.0 slots is a mini PCIe slot, which can be used to house an mSATA SSD drive. However, while it's fine with a single graphics card in place, with a second card in the lower slot it may be a bit tight.

The Trinity platform supports up to four HD displays, so it's no surprise to find all four port types on the rear I/O panel. Triple view is supported by using the VGA and DVI ports with either HDMI or DisplayPort.

There's also that pair of PCIe 2.0 slots. The primary slot runs at full x16 speed with a single card installed; however dropping a second card into the other slot in a CrossFire setup drops the speed of both slots down to x8 speed.

You also get a pair of x1 PCIe ports, which sit between the two larger slots, while an x4 slot sits above them. And if you have any old PCI cards to use, the board also comes with a pair of standard PCI slots.

Under a modest passive heatsink are the components for the 6+2 power design. The heatsink is low enough in profile that it shouldn't get in the way of most third-party CPU coolers. The A85XT (Hudson-D4 FCH) chipset is also passively cooled, with a modestly sized heatsink.

On the bottom edge of the board are the CMOS reset, reset and power buttons. On the Pure Platinum A85XT these are joined by the two-way switch for the dual BIOS.

We used a retail boxed version of AMD's latest A10-5800K CPU with the standard cooler. It stood up to the challenge, but if you want to push the A10-5800K as far as it will go, a third-party cooler is a must.

Performance-wise, the Sapphire board keeps close company with the Asus. In fact it delivers a little extra in the standard CPU tests, and seems to have an edge in the memory bandwidth test.

The main comparison with an IvB i3-3225, using its top-end HD 4000 graphics, works out pretty favourably for AMD. The bandwidth of the high-end Asus Sabertooth is huge, but doesn't help push the i3 ahead of the quad-core Piledriver APU in the CPU tests.

Compared with the pricier Asus board, the £100 price tag makes more sense. Trinity won't be used as the base for a high-end rig, so such feature-packed motherboards aren't vital, but having a solid board like this Sapphire mobo will help get the most out of your APU chip.