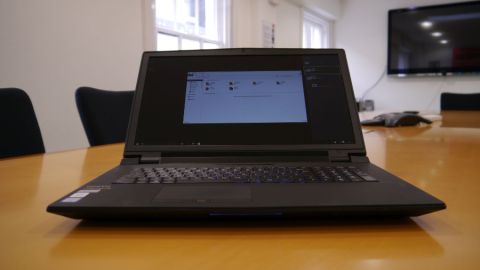 This is an impressive workstation which is good value for money, but on the support front, it won't be ideal for everyone.

We have had our fair share of mobile workstations over the past few months, the HP ZBook Studio G3, the Lenovo ThinkPad P70 and the Dell Precision 7710 being the ones that spring to mind, all coming from top-tier PC manufacturers.

But there are plenty of challengers in the shadows, almost all of them forged from the foundries of a little known, multi-billion dollar Taiwanese company called Clevo. Eurocom, Overclockers, Scan, Schenker, Cyberpower, Chillblast, Novatech and PC Specialist are some of the better known resellers of the brand, either shipping to or based in the UK.

As with other PC Specialist laptops, this one doesn't carry any branding and is identified by a sticker as the Clevo P771DM Style.

This PC Specialist Octane II (our test model retails at £1,749, around $2,480 – this is the machine carrying the Quadro M3000M GPU, and we've previously covered the Octane II with GTX 980 in a full review here) shows the extent to which so-called small brands have managed to catch up with the bigger names out there, managing to pull some fine components together in a chassis that offers plenty of upgradability.

Given that it packs a 17.3-inch display, it's not surprising that this is a rather big product. Weighing in at 3.9kg, it is more of a desktop replacement than a truly portable laptop – it has a thickness that approaches 40mm and a footprint that almost equals an A3 sheet of paper.

Opening the lid reveals what could be mistaken for a gaming laptop. A power button that turns fluorescent green, status lights of the same colour, an electric blue backlit keyboard and gamer-inspired lettering on keys are some of the indications that this is effectively a gaming laptop transformed into a workstation (basically swapping the aforementioned GTX 980 for the Quadro card).

The 17.3-inch full HD matte display – brightness, contrast and colour reproduction can best be described as good – is hooked up to the base unit via two massive hinges, and between the two is an 11-inch long grille. It hides two speakers powered by technology from Japanese audiophile Onkyo (flip the laptop over and you will see a subwoofer as well).

Four stickers adorn the palm rest, one – Sound Blaster X-Fi 5 – indicating the audio credentials of the workstation which also supports ANSP 3D technology; the latter is described as a pure analogue IC version of professional sound effect systems, bringing a "more natural listening experience". The Octane II Pro does have four audio I/O ports including an SPDIF one, and it supports 7.1 audio channels.

Speaking of connectors, other than the aforementioned, there's an HDMI port (presumably HDMI 2.0, capable of supporting 4K at 60Hz), two DisplayPorts, one eSATA/USB 3.0 combo, three USB 3.0 ports, one USB 3.1 Gen 2 port (which doubles as a Thunderbolt port), a Kensington lock, and finally a Qualcomm Killer Gigabit LAN port.

The keys are slightly concave and although we're dealing with a desktop replacement laptop, the keyboard itself is just slightly bigger than the one on the XPS 13. It's also worth noting that there's hardly any space between the keys (1mm at most compared to 4mm for the aforementioned Dell laptop).

As expected, the keys themselves have just about the right level of return. They're not too sharp or noisy and not too mushy or soft. They do, subjectively speaking, seem to need a decent level of pressure to actuate them.

The two keys of the touchpad are excellent and a real treat to operate. A fingerprint reader is located between the two – the touchpad is soft and offers a lower friction level compared to the other rubber surfaces on the Octane II Pro (the palm rest, the area surrounding the keyboard and the top part of the laptop lid).

The choice of components highlights PC Specialist's expertise. Its engineers chose the fastest Core i7 processor available on the market – the Intel Core i7-6700K – to power its workstation, one which is a far more powerful option than the E3-1505M CPU used in the Studio G3 for example.

It does not support ECC memory, vPro, trusted execution technology and, being a desktop CPU, has a far higher TDP than its Xeon cousin (91W vs 45W). But it boasts a base frequency that's a staggering 40% higher than the Xeon and actually costs less.

Note that Xeon processors are not offered as an option should you want to choose them instead.

You can configure the Octane II Pro with up to 64GB RAM using four memory modules. PC Specialist uses Kingston's HyperX Impact 2133MHz modules and this adds £219 (around $310) to the base price, which is reasonable.

Our sample machine came with 32GB of RAM, a 500GB Samsung Evo SSD with a rated read/write speed of 540MBps and 520MBps respectively. A 2TB Toshiba hard disk drive spinning at 5400rpm acts as the secondary storage device. You can also add two M2.SSD drives pushing the maximum storage capacity to a whopping 5TB.

The bundled graphics card is an Nvidia Quadro M3000M with 4GB GDDR5 memory. This is not the top of the range model for professional GPUs and PC Specialist doesn't have any plans to introduce the more powerful members of the family (M4000M, M5000M and M5500). As we already mentioned, the gamer-focused GTX980 and GTX970 are also available for less.

The rest of the configuration of the Octane II Pro consists of a 2-megapixel webcam, an array microphone, 802.11.ac wireless, Bluetooth 4.0, a card reader, and TPM (Trusted Platform Module). Surprisingly, there are no optical drives.

We didn't put the battery life to the test, but the 8-cell, 82Whr battery is likely to last around 130 minutes in typical use mode according to the vendor. Expect around half that under load.

This variant of the Octane II Pro is essentially a gaming laptop that has had a brain swap. Bar the Windows 10 Pro OS and the Quadro GPU, this is a high-end desktop replacement powerhouse aimed at playing resource-hungry games at full resolutions.

How does it compare with the competition? On paper, it offers some quality components and a very competitive value for money ratio. However, there's more to a professional workstation than just an amalgamation of parts.

On one hand, there is no support for ECC, no 4K option and no upgrade path to a Xeon processor, and the notebook doesn't offer softer features like support for MIL-STD standard, onsite warranties (or next business day support or accidental damage protection), ISV certification and colour calibration technology.

On the other hand, compared to the Lenovo ThinkPad P70 range – which offers all of the above – the Octane II Pro has a faster processor and is roughly £900 (around $1,270) cheaper with a similar configuration.

It really boils down to what your priorities are – the likes of Lenovo and HP win when it comes to support, especially if you travel abroad a great deal.