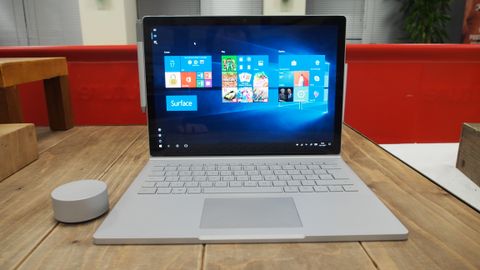 In our Surface Book 2 15-inch review, we state that it’s the strongest 2-in-1 laptop we’ve ever tested, ready to go toe-to-toe with not only every hybrid laptop on the market but a wide range of gaming laptops, too.

When we spoke to Microsoft about the Surface Book 2, we were told its aim with the convertible was to bring desktop-like performance to a mobile device, and while it won’t quite compete with more powerful desktops, the Surface Book 2 13.5-inch does perform brilliantly.

It’s not quite as powerful as its 15-inch sibling, and while the 15-incher can handle a spot of gaming thanks to the GTX 1060 GPU, with the 13.5-inch Surface Book 2, the GTX 1050 doesn't cope quite so well, though as our benchmarks show, if you don't mind lowering some graphical settings, or sticking to older or less graphically-intensive indie games, you should still be able to play a few titles.

Here is how the Microsoft Surface Book 2 (13.5-inch) fared in our suite of benchmark tests:

However, the Surface Book 2 13.5-inch, even the top specification, is definitely more of a productivity-focused device. That shouldn’t come as much of a surprise to anyone, but if you wanted a bit more flexibility to play a few games on your new purchase, the 15-inch Surface Book 2 is the one you should go for – it even has wireless connectivity for an Xbox One controller built in as well.

As you can see from the other benchmarks, the Surface Book 2 13.5-inch does a fine job for most modern tasks, and while the 2GB of graphics memory keeps it from playing many modern games, it’s enough to edit photos and videos on, within reason.

With the Fall Creators Update already installed, you get the latest features without any third-party apps pre-installed. This is similar to getting a Google Pixel 2 smartphone: a piece of hardware from a software maker that’s been tailor made to make use of its latest and greatest software.

When turned into a tablet, there is a hit on the performance, as it can’t utilise the dedicated graphics chip, but we didn’t sense anything too noticeable, and the joy of holding the Surface Book 2 as a tablet cannot be understated.

Windows 10 works well as a tablet OS, with a mix of tablet-like apps and full-fat Windows programs giving you the versatility Android and iOS tablets lack. Of course, the app store, recently rebranded as the Microsoft Store (formerly known as the Windows Store), still lacks many popular apps that Android and iOS boast, so we’d suggest that you’re better off using the Surface Book 2 13.5-inch as a laptop that can occasionally turn into a tablet, rather than the other way around.

Microsoft has worked hard to make the battery life a standout feature of the Surface Book 2, and it has succeeded, with a stated battery life of up to 17 hours of video playback. We’re running tests to confirm this, but so far we have certainly seen excellent battery life, with us using it throughout the day without needing to top it up.

The PC Mark 8 Home battery benchmark, a demanding trial that emulates a standard workload, saw the battery last 5 hours and 59 minutes, a very good showing, though not quite as remarkably long as the 15-inch’s 7 hours 39 minutes.

We’ll update this review when the video benchmark has completed, but for now we can safely say that the 13.5-inch Surface Book 2 is shaping up to be a reliable performer when it comes to all day computing.

When in tablet mode the battery life is reduced (as there are two batteries, one in the body and a smaller one behind the screen, but it still lasted a good four hours with casual use, and you can charge the Surface Book 2 in tablet mode without having to attach it to the rest of the body.

The Surface Book 2 13.5-inch is an excellent all-round performer with plenty of oomph that makes using Windows 10 on it a joy. The battery life is brilliant, and the display is fantastic.

In tablet mode, it’s also a beautiful device to hold and use. With a fanless design, it’s also silent in use.

We’d have liked to have seen a bit more innovation when it comes to the design of the Surface Book 2 to set it apart from its predecessor.

Also unlike the 15-inch version, the 13.5-inch isn’t really capable of playing games. Oh, and it’s incredibly expensive, especially as it doesn’t include the Surface Pen stylus either.

As with the 15-inch version, the 13.5-inch Surface Book 2 is a brilliant device, and the most powerful 2-in-1 laptop we’ve tried. If you’re after an excellent showcase for Windows 10, including the new features of the Fall Creators Update, such as Windows Mixed Reality, then you’ll likely love the Surface Book 2.

It feels like Microsoft set out to make a premium and desirable convertible laptop with no expense spared, so you get excellent performance and incredible battery life.

However, this no expense spared ethos does mean that those expenses are passed over to you, so this is not a cheap device. That price tag is going to put a lot of people off, which is a shame as you’d be missing out on the best 2-in-1 laptop so far.

If you can afford it, and you’re fully invested in Microsoft’s ecosystem, then the Surface Book 2 13.5-inch is definitely worth consideration, especially if the 15-inch version is a bit too large to comfortably carry around.