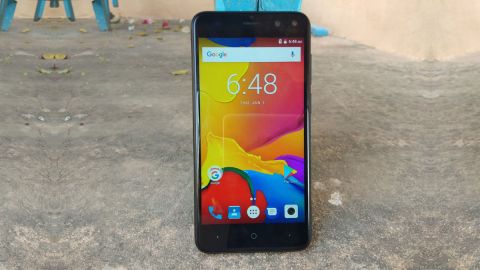 With Elyt Dual, Intex is trying to slip into the selfie smartphone market but it will have to face tough competition from other brands.

The budget smartphone category has evolved a lot in the past few years. The phone makers are now trying to put the once flagship exclusive features on budget handsets. The credit goes to Chinese brands like Coolpad, Xiaomi and LeEco which started offering solid hardware and features at an affordable price to the users. Seeking lessons from this, other Indian OEMs realised the emergence and the popular OEMs like Micromax, Kult and Intex went on a similar route.

Intex recently unveiled another affordable smartphone touted as the Elyt Dual priced at Rs 6,999. The phone competes directly with the likes of Redmi 4A, Nokia 2, Moto C, Xolo Era 2V and the recently launched Redmi 5A. We have been using the phone from last two days and in this article, we have reviewed the phone based on our initial impression with the device. Being a budget smartphone maker, Intex tried to follow the obsession around selfies and launched a phone to quench the thirst of the selfie lovers. Elyt Dual comes with dual camera sensors on the front accompanied by a LED flash to support low light selfies. We got the chance to spend few hours with the phone and this is what we found.

The Elyt Dual features a polycarbonate body with a removable back cover which carries iPhone-like antenna lines on the top and bottom (it is just a design element, it doesn’t work as an antennae). It weighs 149g with battery and has a matte finish with which, Intex has tried to add a premium touch to the phone. In addition to this, the phone has curved edges and can be easily operated with one hand. It lacks a fingerprint sensor which is the most common feature found in other phones falling in the budget category but there is hardly any device that offers a fingerprint sensor under Rs. 7,000.

A 3.5mm headphone jack sits next to the charging port at the bottom. The power button is placed on the right panel with the volume rocker above it. These are plastic buttons but give a tactile feedback upon clicking.

During my limited experience with the phone, I found it pretty tough and perfect for one handed usage. Also, it is thin so slipping it in your pocket is as easy. When you face the front, you will notice thick bezels on the top and bottom where it has the earpiece, dual front cameras and flash above the display and physical navigation buttons painted in silver under the display area. The navigation keys are perfectly visible in good lighting but they are hard to see in pitch dark conditions.

The Elyt Dual comes with a 5-inch IPS HD display with 2.5D curved glass coating on the top. For a Rs 6,999 phone, the display is decent for consuming multimedia and text content. The good thing is that it’s easily readable in bright sunlight also. Obviously you cannot expect deep blacks or AMOLED like colour reproduction on this phone but it still justifies its price tag.

Looking at the dual front camera setup, it’s quite evident that Intex has focused on selfie lovers looking for a phone under a budget. It includes 8-megapixel sensor and a 2-megapixel sensor along with an LED flash to make sure there’s enough light for selfies in poor lighting conditions. While the 8-megapixel sensor mainly captures the object, the 2-megapixel shutter adds depth to the image. It also has a bokeh effect which can also be adjusted after capturing the picture. This means, you can have the bokeh both in real time and vice versa. Users can also change the background of their selfies but this feature lacks proper implementation and looks more like a gimmick.

Some features of the front camera are smile shutter, audio pics, dermabrasion, slim face etc. which we will be elaborating in our in-depth review.

Despite of good camera sensors, the support from the performance department has some flaws. I noticed occasional lags and slowdowns in the camera app for both front and rear cameras.

Coming to the primary camera, the phone has an 8-megapixel sensor accompanied by dual-LED flash. After our limited experience, we are pretty sure that this is not the best camera you’ll get under this price. The shutter speed is slow, camera interface lags and the results are also not up to the mark.

Even the budget smartphone these days are offering large battery up to 4000mAh, but Intex decided to stick with a 2400mAh battery with Elyt Dual. However, the company claims it can sail you through a full day on a single charge.

It would be too early to say about the capability of the battery as there are no third party apps which consume more power than others. The phone runs on the Android 7.0 Nougat.

A 32-bit quad core Spreadtrum 9850 chipset runs inside the Intex Elyt Dual with 2GB of RAM. It is a budget chipset which certainly leaves us with some expectations, not the best ones to be specific. It has 16GB internal storage with microSD card support that is expandable up to 128GB.

The performance felt smooth initially but we are not sure whether it will continue to do once we load it with bunch of apps and use it with data connection. You cannot expect it to run high end games or do multitasking flawlessly, but you it can get you through basic tasks like surfing and consuming media without a hitch.

For Rs 6,999, we are not very confident to recommend this phone to you as there are better options available under this price. In a competitive market where phones like Redmi 5A are available at just Rs. 4,999 with better set of specifications and features, it will be tough for Intex Elyt Dual to beat the competition.