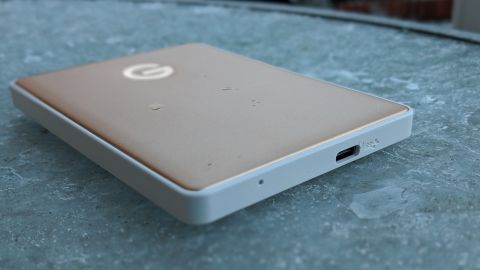 It’s hard to recommend the G-Drive portable hard disk drive when there are other capable alternatives out there either in WD’s own portfolio or elsewhere. The WD My Passport Ultra is the better product should you want a three-year warranty and a USB Type-C connector.

G-Technology is a subsidiary of WDC (Western Digital Corporation), one of the largest hard disk drive manufacturers, alongside WD, Sandisk, Upthere.

We’ve reviewed G-Tech products in the past including its 500GB external portable SSD, with its 4TB external desktop hard drive being the most recent subject of our scrutiny.

Here we are looking at the company’s latest model, the G-Drive mobile USB-C 2TB portable hard disk drive. It’s available in 1TB, 2TB and 4TB versions in silver, white and champagne gold colors (though you can only get the latter with the 2TB drive). They all come with a three-year warranty and a USB Type-C converter.

The model that landed on our desk was the flashiest of them all. The designers opted for a pink champagne gold brushed finish for the metal top and bottom with a white plastic border, perhaps to match the finish of the Apple MacBook. The Type-C connector is located next to a status LED, and the ‘G’ logo on the front could be mistaken for one of the many luxury brands that start with the same letter.

Here’s how the G-Drive mobile USB-C 2TB performed in our benchmark tests:

The drive is Mac formatted by default, so you’ll need to format it for Windows if you’re intending on using the device with Microsoft’s operating system. This can be achieved by using the Computer Management services within Windows or by downloading a dedicated formatting utility from G-Tech. There’s no software package included here, in contrast to WD’s MyPassport Ultra.

The drive is rated at 140MBps for the 2TB version in terms of read speed, dipping to 135MBps for the 4TB model due to the increased number of platters. Note that the G-Drive mobile USB-C uses a Gen 1 Type-C connector which means that it is limited to a theoretical maximum speed of 5Gbps, similar to USB 3.0.

We don’t know much about the internal hard drive itself other than it having a 5400RPM spinning speed and, in all likelihood, two 1TB platters, which has been the maximum available for the last three years. It carries the ID string ‘wd20smzm’ which would make it a close relative of the WD Blue 2TB 2.5-inch Mobile Hard Drive, a drive that sells for under $77.

The G-Drive proved to be a capable performer in our standard benchmark tests, although its read speed barely got past 100MBps on CrystalDiskMark 6.01, significantly (and surprisingly) lower than the aforementioned quoted figure from the manufacturer. Write speed on that particular test was more in line with our expectations at 133MBps. Our test 10GB file was transferred in 86 seconds which is about average.

The pedestrian performance of the G-Drive is symptomatic of the state of the 2.5-inch hard disk drive market, which has seen little evolution beyond the 1TB platter barrier. Given the fact that 1TB external SSD devices have just broken the 16 cents/GB barrier, it is only a matter of time before they take over the 2TB space.

Western Digital brands tend to carry a higher price per terabyte compared to arch-rival Seagate. Sadly, the G-Technology G-Drive mobile USB-C 2TB suffers at the hands of this trend – it is more expensive than Western Digital’s own premium brand without offering much more. It does carry a three-year warranty and has slightly better performance, but that’s about it.

How bad is this issue? Well, the G-Drive mobile USB-C retails for $93.20 at Amazon. WD’s own 2TB Element drive sells for $59.99, so that’s a premium of 55% (or just over $33) for the G-Drive, which is hard to stomach given that the two are likely to use the same 2TB hard disk drive for economies of scale.

Both Toshiba (with the Canvio Basics range) and Seagate match WD’s $59.99 for 2TB portable hard drives. They have a shorter warranty (one-year), no preloaded software, an old school USB connector, and a ‘classic’ design, but they do the job of storing gargantuan amounts of data safely.

The My Passport Ultra, which is almost exactly the same device, retails for just over $84, making it the better alternative should you absolutely need a USB Type-C connector and three-year warranty.

Seagate gets a special mention as it offers a two-month complementary membership to Adobe Creative Cloud Photography Plan worth $20. As a rule of thumb, older models are likely to cost less because they have reached maturity.