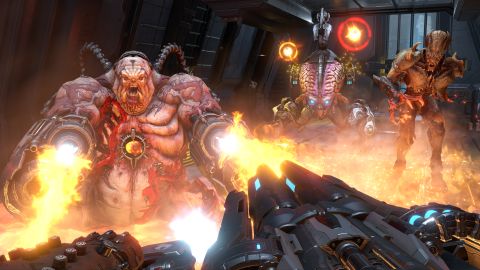 Doom Eternal is shaping up to be one hell of a sequel. While the action-packed game suffered from a few hiccups in previous hands-on sessions, our most recent session left any concern in the dust. Doom Eternal is blood-pumping, gore-packed fun and it's certainly not as mindless as its predecessors - in the best possible way. Those who were frustrated by the delay will certainly not be disappointed.

WHAT IS A HANDS ON REVIEW?

'Hands on reviews' are a journalist's first impressions of a game based on spending some time with it ahead of our full review. In this case, we played for 30 minutes after the Bethesda keynote at E3 2019 and 45 minutes at QuakeCon Europe 2019. The important thing is we have been able to play with it ourselves and can give you some sense of what it's like to use, even if it's only an embryonic view. For more information, see TechRadar's Reviews Guarantee.

When Doom burst onto the scene in 2016, id Software’s legacy franchise had been given a new lease on life. That lease came with pounding heavy metal music and action so fast it would make the player’s head spin, and the critical acclaim showered upon it was well deserved.

id is now trying to capture Hell’s lightning in a bottle for a second time with Doom Eternal, again pitting, you, the Doom Slayer against demons big and small. This time the horde is not content to stay within the boundaries of Hell, using portals called slipgates to invade Earth, Mars, and more. As the Doom Slayer, it’s your job to repel the monsters with bullets, rockets, and the occasional plasma burst.

We were able to get some hands-on time with Doom Eternal at E3 2019, QuakeCon Europe 2019 and, most recently, at a testing event. Here’s what we thought of our latest trip to Hell and back.

The E3 Doom Eternal demo kicked off with a brief tutorial, giving us a feel for the Doom Slayer’s many mobility options. He can leap across tall chasms using a double jump, grab and scale certain walls with a wall climb mechanic, and dash forward with one press of a button. Combining these movements can cover a lot of ground in a hurry, fitting in perfectly with the game’s aggressive style.

The performance of those mechanics, however, left a bit to be desired during the E3 demo. One section of the tutorial had us climb a wall, then double jump and double dash to another climbable wall further down the hall. We were able to latch onto the first wall just fine, the issues came with getting into the second wall while in midair. With each try we would get to the wall, but the command to grab the wall wouldn’t register when we pressed it. After a few tries we finally got it and were able to move on, but felt being held up by something like that with only 30 minutes in our demo was a tad disheartening.

When we played the same demo again at QuakeCon Europe, however, didn't encounter this same issue and instead the tutorial - and game itself - ran smoothly. In fact, in the most recent hands-on session (which was considerably longer than the demos), the movement and combat overall was even smoother. There was an instance where we had to use a 'Dash' ability to guide the Doom Slayer across unstable platforms through spikey chains and lava - and for a big guy, he moved pretty seamlessly.

The second half of the E3 demo illustrated what combat will be like, which admittedly wasn’t much more than “point gun, shoot gun". We did get a taste of Doom Slayer’s new tools, which turn him into a sort of walking Swiss army knife. He’s got a mini-flamethrower that can stun enemies, a chainsaw for quick melee kills as well as a normal punch melee attack, frag grenades, sticky bombs, and his arsenal of guns. He truly is packed to the teeth.

Our eagerness to try all of these toys out in battle would have to wait though, as we once again found a tutorial section that worked against us. Here we needed to kill a demon separated from us by a wall using the Rocket Launcher’s remote detonation ability, but all the tutorial told us to do was “shoot around the wall”. We tried to the left, to the right, and above to no avail, until after 25 rockets or so finally one of them detonated close enough to kill the demon. Again we were frustrated by a wonky tutorial delaying progress, but now it’s finally time to take the fight to the horde.

In the QuakeCon demo, this issue had been rectified. Instead having you shoot straight between two parallel walls, detonating the rocket and killing both enemies hidden behind them - a much easier affair.

When it came to the recent hands-on session, we truly got a taste of Doom Eternal's combat. While the demo's job was to throw us in the deep end, the hands-on session gave us more room to breathe and experience the game as a player actually would - and it was so much better.

Doom Eternal's action, while the crux of the game, is well-paced. You won't always be fending off waves of demons, but there's also rarely times of lull. It's a great balance, where you grow to consider just a handful of demons in your path a 'lull'. Which they kind of are in comparison to arenas, which sees demons treating you like catnip.

But with extra time to get to terms with the mechanics, our own playstyle and the best strategic way to approach combat, Doom Eternal becomes much more enjoyable. You almost get into a rhythm and the blood-pumping soundtrack from Mick Gordon gives you that extra shot of adrenaline when you begin to feel frustrated with death. There's something beautiful about jumping from demon to demon, executing one before shotgunning another, all to the guitar-heavy rhythm of Gordon - it's actually quite cathartic.

To Hell and back

The demo continues with the cutscene we saw in the first Doom Eternal gameplay reveal in 2018: Doom Slayer walking through the spaceship and everyone stopping to stare at him. He dragged one worker by his badge to the module, unlocked the door, “borrowed” a plasma rifle from a soldier in the next room, and the fight was on.

Outside of the confines of the tutorial, when we’re allowed to cut loose and take on enemies in our own style, Doom Eternal’s combat flourished. We found ourselves getting attacked from every angle by all sorts of demons, but the tools at our disposal (and the ones we find along the way) were more than capable of repelling them. Each gun felt powerful in our hands, every blast of the shotgun or the fwoosh of a rocket being launched gave us a shot of adrenaline. We felt unstoppable, which is exactly how the Doom Slayer should feel.

We were also impressed with the variety of ways in which demons attacked us, often adapting to the battle and sometimes even surprising us with attacks. In one instance we came upon a Mancubus with its trademark dual rocket launchers, which we disabled by shooting them off of its hands. Unfazed by the loss of its weapons, the beast started pounding the ground, each pound causing a decent amount of damage if we got too close. These monsters were plenty scary enough, but now that they can change their battle strategies on the fly none of them can be taken lightly.

While we were impressed with this in the demo. It's in the hands-on session that we truly got to make use of Doom Eternal's more interesting combat mechanics: weapon customization and upgrades, to tune the Doom Slayer to our playstyle.

For example, it's possible to pick up crystals which grant you a weapon upgrade or you can complete encounters to earn other weapon upgrade points. So while you may have a pretty decent arsenal, being able to hone it further allows you to have more fun with your Doom Slayer - and killing things.

It's an RPG element that we really enjoy with Doom Eternal and we see some more littered throughout the game. For example, there's abilities to fast travel through the hive-like map or, or favorite, the option to grab collectibles such as cheat codes, toys and codexes - adding some extra replay value to the game.

Our time with Doom Eternal was adrenaline incarnate, its frenetic action and pounding heavy metal soundtrack made us feel unstoppable. Every shot, every chainsaw, and every punch gave us a jolt of pure energy, and we couldn’t get enough.

Doom Eternal has gone from being a dark horse, to one of our most anticipated games of 2020. We can't wait to get our hands on it properly.

The Doom legacy continues to hold strong, and with Eternal we could be in for the most hellish adventure yet.

Doom Eternal will launch on Xbox One, PlayStation 4, Nintendo Switch, and PC on March 20, 2020.