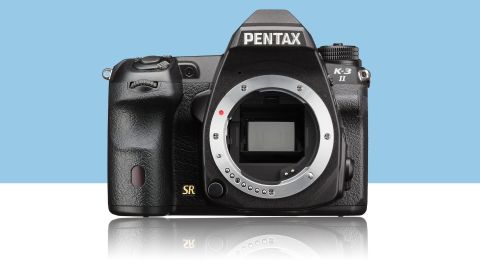 The K-3 II looks and feels like a solidly built piece of kit. There's a textured coating around the grip and in other areas, which give you a good bit of extra purchase and add to the camera's high-quality feel. Your middle finger sits comfortably in an indent on the grip, and there's a pronounced thumb rest on the rear of the camera.

The array of dials and buttons on the K-3 II confirm that this is a camera aimed at enthusiast photographers rather than pros. A scroll wheel on the back of the camera sits nicely under your thumb, while another, in front of the shutter release, sits under your forefinger. By default, the front dial controls shutter speed, while the rear dial is for aperture. Both will work if you're in Manual mode, while one or the other will work if you're in Shutter or Aperture priority mode, and overall it's a very natural way to work.

There are also three 'custom' slots, enabling you to configure shooting setups that you use frequently or for particular conditions. The mode dial can be locked with a switch, which is useful if you're taking the camera in and out of a bag often.

On the back of the camera there's the ubiquitous four-way navigational pad, each segment of which controls a different function – the left segment, for instance, accesses the white balance options, while right accesses the Custom Image options.

In order to set the autofocus point (if you have Select Point Autofocusing mode activated), you need to press the AF select point button on the back of the camera, and then use the directional keys to move to the point you want. The facility to change the focus point will remain active until you press the AF select point button again, which is handy if you're going to be changing the point repeatedly.

Pressing the 'Info' button near the base of the camera brings up a range of options which constitute a 'quick' menu. You can navigate to options including ISO, Digital Filter and Pixel Shift Resolution, then use the rear scroll wheel to adjust the setting.

On the side of the camera is a group of buttons that are within reach of your left thumb when you're supporting the lens with your left hand. There's an AF mode button, which enables you to select from the modes such as Spot, Auto and Selection. There's also a switch for quickly moving between autofocus and manual focusing.