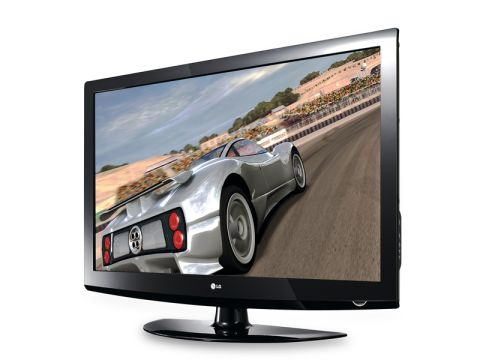 We found this pretty LCD TV extremely easy to use

A solid set in some ways, but the motion blurring problem can be too extreme

We’re getting pretty used to seeing outlandish contrast ratio figures in the flat TV world these days, but at 50,000:1, the contrast ratio of LG’s 32LG5000 outguns its rivals today by a massive 40,000:1.

Will this figure be truly apparent in the TV’s picture quality, or will it just provide more ammunition for the argument that quoted contrast ratios are untrustworthy?

LG is keen to impress

Before we find out, we should say that the 32LG5000 is a pretty little thing with its faintly convex gloss black surround, subtle arc along the lower edge, ‘speakerless’ design and slinkily emphasised ‘power light’ to bottom right. The whole thing sits on a swivelling stand, too. Cute.

The 32LG5000 also impresses with its connections, delivering three Deep Color-enabled HDMIs despite its relatively deflated (for a new TV) price of £600, as well as the increasingly standard PC input and a component video input to support owners of the original, non-HDMI Xbox 360.

It does have a dedicated Game picture preset, though, directly accessible via a dedicated ‘AV Mode’ button on the remote. Actually, this TV is generally extremely easy to use, with some excellent icon-driven onscreen menus helping keep things as simple as possible.

Other notable features of the 32LG5000 include the latest version of LG’s XD Engine picture processing, with its familiar focus on boosting colours, fine detailing, motion, noise handling and contrast, as well as an energy-saving light sensing system that reduces picture brightness as your room gets darker.

Let loose on the Xbox 360’s Forza Motorsport, the 32LG5000 reveals itself to be a decent enough performer, generally speaking.

The set’s fine detailing is very good, reproducing the sumptuous three-dimensional sheen the programmers have managed to apply to the lovingly recreated cars, and bringing out all the detail there is to be had from the game’s slightly bare backdrops.

Colours are rich and bright too, and there’s only a hint of noise being added to the 1080i image by the process of downscaling it to fit the screen’s 1366 x 768 resolution.

Sonically, the set is surprisingly good considering it has no visible speakers, combining expansive soundstage dynamics with some solid bass. Some effects can sound too dislocated from the screen, mind.

There are two areas where the 32LG5000 slips up, though – motion and black levels. The black level issue is less aggravating: images get dark enough not to leave you squinting through grey clouds.

We’re just saying that they don’t go as profoundly black as some rivals. So much for the 50,000:1 contrast ratio, then.

The motion handling issues are far more damaging. Even with the game mode active, rapid pans look smeared. This blurring is even more apparent during video viewing, especially with standard definition.

But having had a taste of the best elsewhere, we know which way we’re going to jump.