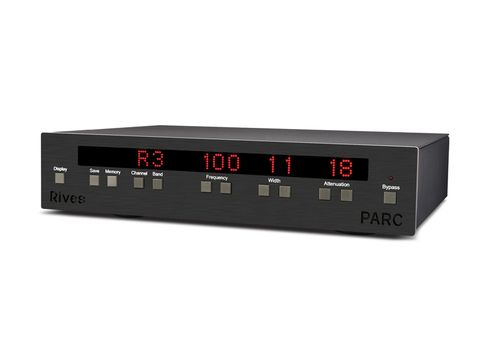 It's an unusual piece of kit, but one that offers a good improvment in sound quality

Novelty is a bit of a moveable feast. A CD player can still have novelty interest if it uses a new DAC chip or a different kind of output circuit. The PARC, though, is something quite unlike any product we've reviewed in Hi-Fi Choice before.

It's a room correction unit, and it's true we've seen the odd one or two of these, but it works in a very different way from any other we're aware of. Indeed it's a little ironic that several years after the first digital room correction devices, this is the first analogue one.

The idea of using an analogue filter, or rather a set of them, to compensate for room acoustics is ancient – that was always one of the justifications of tone controls. Crude filters like those, however, seldom accomplished anything really useful and it was always guesswork setting up.

Two significant factors ensure that this is a lot more useful. First, it is a sophisticated parametric filter bank, with centre frequency, width and depth adjustable for three separate bands, on each channel independently.

Second, it relies on using computer aided measurement of the room and sound system to determine the settings required. In other words, it does pretty much what digital systems do, but without the automatic programming of filter characteristics and, significantly, without any necessity to turn the audio signal into analogue form at any point.

Inside the box are two identical boards, one for each channel, containing enough op-amps and digitally programmable potentiometers to construct the filters, which can be quite simply programmed from the front panel with centre frequency, width and depth of attenuation.

The easiest way to set this up is with the matching BARE software, which runs on a PC, using an attached measurement microphone. It's not the only way, however, and Rives supplies a suitable test disc for use with the widely available Radio Shack sound-pressure level meter. You could also use the XTZ Audio Analyser which we reviewed a couple of issues ago.

In practical terms, the PARC (that's Parametric Adaptive Room Compensation, by the way) sits between pre and power amplifiers, or in the tape loop of an integrated. It has balanced and unbalanced inputs and outputs and operates at the usual line level.

It's beautifully constructed, in dual mono apart from the mains transformer, robustly housed and easy to operate, with three memories so you can try different settings without losing your original parameters.

Having taken a bit of trouble to set up our PARC, we were struck by two things. First, in 'bypass' mode (no filtering active) it is admirably transparent. Its effect on the sound is barely noticeable, as one would hope – maybe imaging is minutely reduced but that's about it.

Second, it's quite hard to evaluate quickly because it has an effect on the subjective loudness, with most (not all) music. That's hardly surprising, of course, but it means one has to listen for a while to establish that this is indeed a very beneficial unit. As a result, sound is clearer all round and better timed.

Overall this is a very impressive piece of kit. It won't work magic on bad rooms and Rives sensibly suggests that acoustic measures are taken before set up.

With care, though, it can give a real lift to an already decent system and, as such, is very good value.