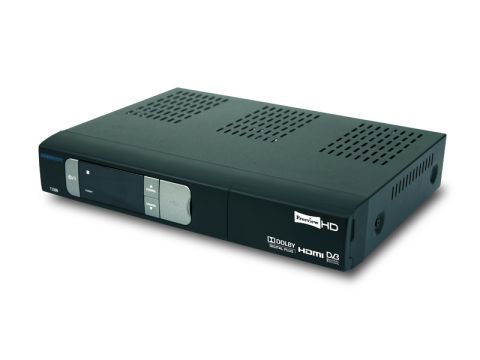 The Icecrypt T2200 will eventually function as a PVR

With around 18 million hi-def TVs in the UK still showing only standard-def channels, the market for next-gen Freeview HD receivers such as the Icecrypt T2200 is potentially huge – especially with the World Cup around the corner.

And while demand may be dampened for now by the slow spread of Freeview HD broadcasts around the UK – and by initially high prices – Icecrypt's maker Turbosat has gone out of its way to give its diminutive, yet powerful, digital box some tempting attributes to extend its appeal.

Forget high definition – this is one of the fastest and finest Freeview set-top boxes we've seen.

The T2200 is Icecrypt's only Freeview HD receiver. Elsewhere in its range of Freeview set-top boxes is its similarly designed T5000, a simple Freeview receiver that doesn't handle high definition. The T5000 sells for just £49 – evidence that Freeview HD commands a considerable premium, at least for now.

The Freeview HD experience extends to just three channels – BBC HD, ITV 1 HD, and 4HD. The first two are likely to feature simulcast hi-def versions of live World Cup matches (from BBC and ITV channels, respectively) this summer, while a fourth HD channel could be added by the end of 2010.

Boasting DivX and even DivX HD playback from its USB slot, the T2200 will, we're promised, soon be able to record programmes to an external hard drive, and stream BBC iPlayer services next year, though this latter future-ready feature is common to almost all Freeview HD set-top boxes.