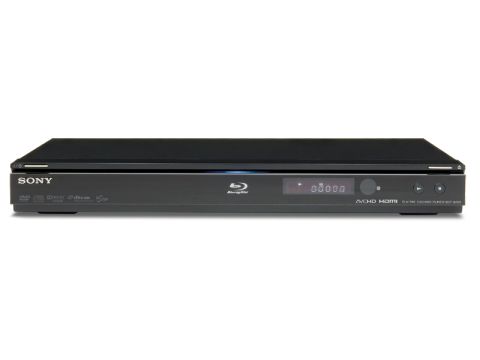 Sony's budget Blu-ray player might have trimmed the features, but not the quality

If you want snazzy features look elsewhere, otherwise impressive pictures and a smart operating system save the day

Sony's BDP-S360 is its latest entry-level Blu-ray spinner, replacing the popular BDP-S350, and once again offers a decent set of features at an affordable price.

Unlike its predecessor, which required a firmware upgrade to make it Profile 2.0, this model supports BD Live out of the box, so it's finally time for Sony's standalone players to step out of the PS3's shadow and show us what they're really made of.

Compared with Samsung and Philips' glitzy players, the BDP-S360 looks positively mundane with its conventional boxy shape, minimal fascia and all-black finish, although a blue light does jazz it up a bit. There's no USB port on the front though, which might be a turn-off for those who fancy a bit of easy-access multimedia action.

To enjoy HD audio formats such as Dolby True HD and DTS HD Master Audio you'll need an AV receiver with HDMI inputs, as there are no multichannel analogue outputs. The S360 can decode the HD formats and it will output them as LPCM via HDMI.

There's an Ethernet port on the back for connecting to the web and downloading BD Live content, but after experiencing the Wi-Fi wonders of the Samsung BD-P3600, we're afraid this clunky connection just doesn't cut it anymore. It's a shame that Sony didn't include a Wi-Fi connection here.

Also disappointing is the fact that the mandatory 1GB of memory needed to store web downloads has to be added using a USB flash drive that plugs into the port on the back. And this socket can't be used for media playback – digital files have to be played from DVD or CD, but the deck only supports MP3 and JPEG.

If you want to spin old, battered discs, the Precision Drive is on hand to stabilise playback of anything that's been scratched or bent. Rounding up the decent, if not overly generous, feature list is 1080/24p output, 1080p DVD upscaling and Bravia Sync.

There may not be an abundance of killer features, but the S360 gets it pretty much spot on when it comes to the user-friendliness front. It's one of the slickest Blu-ray decks we've encountered, which is largely due to the ludicrously named, yet brilliantly clever, Xross Media Bar.

Imported from the PS3, this groovy-looking menu screen is stylish, responsive and logical. Why can't all user interfaces be like this?

The remote's uncluttered layout and clear labelling make it a doddle to use, especially as the well-signposted 'Home' button is there to take you back to the main menu whenever you like.

The only operational qualm we have with this player is its comparatively lengthy disc loading time. While its Korean counterparts are clocking up Usain Bolt-like speeds of around half a minute when loading Spider-Man 3, this deck limps in at 53 seconds.

This news is tempered by the inclusion of a Quick Start mode that boots up the deck in six seconds, although power consumption is higher when it's turned on.

The S360 delivers impressive hi-def picture quality that belies its budget price tag. It may not reach the heady heights of the latest Pioneers or Panasonics, but is up there with the best of its budget rivals. At the heart of this impressive performance is the deck's keen eye for detail and strong contrast levels, which ensures a rich and punchy picture with both dark and brightly-lit scenes.

I Am Legend, which has become one of our favourite Blu-ray test platters, looks magnificent; the opening shots of New York tell you a lot about a player's performance and here they are sharp and three-dimensional. The skyscrapers on the horizon have a convincing sense of perspective and the abundant detail in Times Square is reproduced with astonishing acuity for a budget deck, although we've seen better detail retrieval from both the Panasonic DMP-BD80 and Pioneer BDP-51FD.

Colour fidelity is spot on – every skin tone looks utterly convincing, while subtle tonal blends and shading appear smooth and natural. Bright colours dazzle too, but when night time rolls around, the S360 keeps the picture looking well-defined and doesn't let any shadow detail slip through its fingers.

It backs up this stellar hi-def performance with impressive DVD upscaling capabilities. There's no obvious stepping on diagonals, noise is kept to a minimum and colours look natural.

We let the Sony convert I Am Legend's Dolby True HD soundtrack into LPCM and the results were thrilling, with no discernible difference between the deck's decoding and that of our test receiver.

Effects are expansive and well steered, Will Smith's dialogue is clearly articulated and the jumpy zombie bits are delivered with venom. We also enjoyed listening to CDs on this player because of its smooth, rhythmic and well-balanced presentation of music.

Although its performance is good for a £200 player, those missing features inevitably take their toll on the overall value score.

For a bit more cash you can get the Samsung BD-P3600, a player with Wi-Fi connection, built-in memory, multichannel outputs and extensive USB media playback capabilities. But if you're not concerned with any of these features, or if you're a staunch Sony loyalist, then you'll probably be quite happy with what the BDP-S360 has to offer.