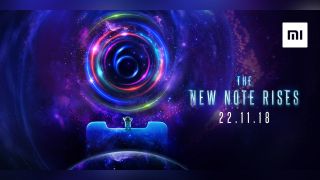 The Redmi Note 6 Pro may be the next Xiaomi phone to launch in India. According to a report from Smartprix, the phone will be launched in India on November 22. Xiaomi has also started sending out invites for a launch event on the same day.

The invite reads "A new Note rises", which hints that it could be the upcoming Note-series phone. Additionally, a report from Livemint also mentions that the Note 6 Pro will be the next Xiaomi phone to land in India.

The Redmi Note 6 Pro has already made its way to other markets like China, Indonesia, and Thailand, and it is powered by the same Snapdragon 636 chipset as on the Note 5 Pro. As per various reports, it has been confirmed that the phone will retain a similar set of specifications for the Indian market as well.

The Redmi Note 6 Pro succeeds the very fresh ‘Pro’ series of handsets under Redmi Note branding. It’s the second ‘Pro’ phone in the series after the Note 5 Pro. Xiaomi had distinguished between the existing Note series by introducing better-specced Pro variants to add more options for buyers.

The Redmi Note 6 Pro has a 6.26-inch (2280x1080p) display with 19:9 aspect ratio. The display has also got an unspecified version of Gorilla Glass protection on top.

It is powered by a Snapdragon 636 chipset and comes in 6GB/8GB RAM variants. The Chinese variant offers 64GB internal storage with up to 256GB of microSD card support.

Upgrades over the Redmi Note 5 Pro

The first noticeable change is in the display. The Note 6 Pro gets a taller 6.26-inch display with a notch up front, which is a home for two selfie cameras instead of one.

Rest of the hardware specifications look alike on paper, although, we cannot confirm if there are any software improvements on top. However, we might see the latest version of Xiaomi’s custom ROM as it is speculated to come with MIUI 10 on top of Android Oreo.

Xiaomi does have a launch event on November 22, so we could see the handset arrive in a week from now and find out if it’s actually an update or just an ‘upgrade’.