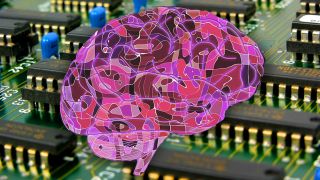 The US Defense Advanced Research Projects Agency (DARPA) has announced an initiative to create an advanced interface for linking the human brain to a computer.

The program, dubbed the Neural Engineering System Design, or NESD, aims to develop an implant no larger than a cubic centimeter capable of translating electrochemical signals in the brain into the more conventional ones-and-zeros that are legible to computers.

According to DARPA, the types of neural interfaces currently approved for use on humans cap out at about 100 channels, each reading the signals of tens of thousands of neurons.

The NESD program believes that such a small number of channels overloaded with signals result in "noisy and imprecise" data, and that its new interface would handle up to a million neurons per channel in the brain.

"Today's best brain-computer interface systems are like two supercomputers trying to talk to each other using an old 300-baud modem," said Phillip Alvelda, NESD program manager. "Imagine what will become possible when we upgrade our tools to really open the channel between the human brain and modern electronics."

While designed primarily for defense use, possibly for monitoring soldiers in the field, the technology could have a number of other potential uses, including greater detail for brain mapping and psychological studies.