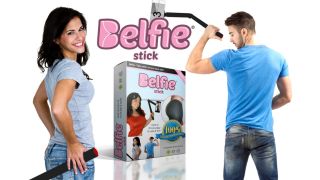 At the turn of the twentieth century, US Commissioner of Patents Charles Holland Duell is quoted to have said, "Everything that can be invented has been invented". Whether or not he ever actually made this comment is heavily debated, but if he did, there'd be a whole lot of egg on that face right now.

Because, folks, someone has come up with the belfie stick.

For the sake of the uninitiated, let us explain: a belfie is a derivative of the 'selfie' whereby instead of taking a picture of your face, you take it of your butt. Like the controversial selfie stick, the belfie stick is designed to make this act easier by offering extra length and pivot for your smartphone.

Despite the fact its design is "patent-pending", you can pre-order one for the crazy price of $80 (around £52/AU$99) on the website right now. Now let us never speak of this again.

Erase all of this from your mind with some more blips.