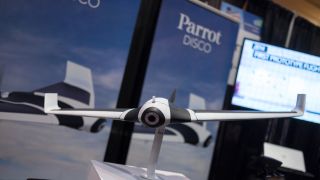 Update: We've had a chance to learn more about the Parrot Disco drone. Check out the video below.

Remember making paper airplanes as kid? You'd fold the paper ever-so carefully, then with a flick of your wrist, send the airplane soaring through the air.

Parrot is recapturing some of that childish glee with its new Disco drone prototype, except it blows anything you ever made as a kid out of the water. It's the first single-wing drone, and to get it off the ground, all you have to do is grab hold and give it a throw. It will automatically take off, almost like it were a bird taking flight, and ascend all on its own.

The Disco is controlled by autopilot, so it will keep flying - for 45 minutes - before you summon it home. Autopilot prevents it from performing maneuvers that would bring it down, while sensors like an accelerometer, barometer and gyrospcope along with triple-axis digital stabilization keep it steady during flight.

It's powered by an 8-inch propeller and a high-speed engine. Though the wing is fixed, it's removable. And while autopilot is there if you want it to be (like if you don't have flying experience, for example), Parrot demonstrated how users can take over with a Skycontroller pad and FPV glasses, letting you see what the drone sees. It's also compatible with an RC remote control, and users can set a flight plan before takeoff.

The drone is fixed with a 14MP front-nose camera, capturing a bird's eye perspective of the flight. It also sends back real-time telemetry and flight data. When it's time to touch down, the Disco can land automatically on its own.

While this is just a prototype, the real thing will come to market in 2016 for a still-unknown price. Our Matt Swider learned more about it at CES:

In addition to the Disco drone, we're also being treated to the Parrot POT. It's a smart pot for your plants that automatically waters when it deems necessary and will alert you when your flora needs more light or fertilizer. It's not as fun as a self-flying drone, but at least it will keep your ever-dying plants alive.