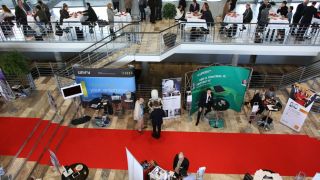 CeBIT is the biggest tech event in the world.

The third big event in the global technology calendar, CeBIT, kicks off later today and will be officially opened by the German Chancellor Angela Merkel.

This year's theme, d!conomy, focuses on digitization ad the impact it has on every aspect of business and society (last year's was all about databiity).

The world's biggest technology event – its 23 halls occupy 260,000 square metres or about the size of MWC and CES put together – is expected to welcome more than 200,000 visitors with the overwhelming number coming from the business community.

This year's foreign guest, Chinese Vice Premier, Ma Kai, will do the same with a massive Chinese Central Pavilion and an armada of more than 600 Chinese companies.

The unexpected highlight of the event though may well be from an outsider. NSA Whistleblower, Edward Snowden, is expected to make a virtual appearance on Wednesday and will be interviewed by Glenn Greenwald.

TechRadar Pro will be reporting from CeBIT with meetings scheduled with many of the big players in the enterprise segment.