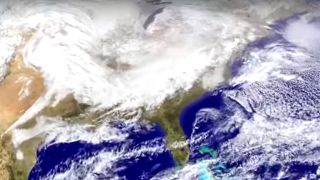 NASA, in conjunction with NOAA, has compiled satellite footage of the massive winter storm barreling down on the United States this weekend.

Collected by NASA-NOAA's Suomi NPP and NOAA's GOES-East satellite, the time-lapse footage tracks one frontal system moving from the south as it converges with a second low-pressure system approaching the Eastern Seaboard, which is expected to comprise the upcoming blizzard.

Dubbed Winter Storm Jonas, the major snowstorm is on trajectory to pile an estimated two feet of snow between January 22 and January 23.

Severe weather is also expected in an assortment of other states, including southeast Texas, Mississippi, Louisiana and northern Florida.

Airlines have already prepared delays and cancellations, with the storm being compared to 2010's "Snowmageddon" blizzard.

For more updates on the storm and weather conditions, the National Weather Service is providing round-the-clock checks as well as safety advisories during extreme winter conditions.