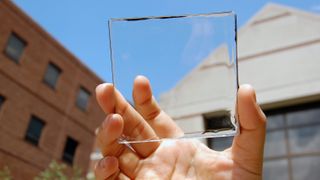 We can see clearly now the pane has come

A MIT startup has come up with a novel way of tweaking solar cells to remain transparent while still gathering usable energy from the Sun.

A transparent solar cell is difficult to build - solar cells traditionally capture energy by absorbing sunlight and converting it into electricity. A transparent cell, by definition, must allow sunlight through instead so it can reach your eye - that's why previous attempts at making see-through solar panels have only partially been transparent.

Ubiquitous Energy has been wrestling for years with that problem, but now has come up with a promising breakthrough. Instead of trying to make a transparent cell, they've built instead what they call a "transparent luminescent solar concentrator".

Here's how it works. The cell is made of plastic, and embedded in that plastic are chemicals that absorb non-visible wavelengths of light (infrared and ultraviolet). As they absorb them, they glow in another non-visible infrared wavelength, and that glow is guided to the edge of the plastic. There, thin strips of conventional photovoltaic cells absorb it and convert it to electricity.

Right now efficiency is low - only about one percent. But the researchers believe that an efficiency of ten percent is possible by the time the technology makes it to production. That's still half the effectiveness of a traditional solar cell, but if every window in a house or office block was converted then it could add up to a reasonable figure.

"It opens a lot of area to deploy solar energy in a non-intrusive way," Lunt said in an interview with Michigan State's Today blog. "It can be used on tall buildings with lots of windows or any kind of mobile device that demands high aesthetic quality like a phone or e-reader. Ultimately we want to make solar harvesting surfaces that you do not even know are there."

The team's research was published in Advanced Optical Materials (via ExtremeTech).