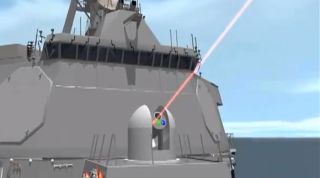 Technology can excite and delight, but of course it can devastate and destroy too. Many of the technologies we take for granted are spin-offs from military programmes, and our governments spend huge sums every year to find new and exciting ways to turn people into chowder. Not all scary tech is military tech, however: as we'll discover, some of the stuff that really gives us the screaming heebie-jeebies is supposed to make the world a better place. So which technologies do in fact pose a threat, and which sound scary but aren't really? Let's find out.

There's been an enormous gap between what lasers can do in films (go 'pew pew pew' and blow stuff up) and what they do in reality (look cool at gigs), but from 2014 that gap will be gone: the US Navy will begin deploying laser weapons next year aboard the unfortunately named USS Ponce. The systems will initially be used to destroy drones, but clearly it's just a matter of time before they're strapped onto sharks.

Science Fiction loves its emotionless killing machines, but such machines aren't fictional, they're flying and fighting, and have been for years. US drones have been attacking targets in Pakistan for nine years now, with an estimated death toll of between 1,969 and 3,461. Drones are increasingly being used for law enforcement too - Vanguard's Shadowhawk, a popular choice, can be fitted out with tasers, automatic shotguns and even grenade launchers - and Google's Eric Schmidt reckons it's just a matter of time before terrorists start messing around with them too.

Let's play word association. We say "computerised car" and you say "crash". The association is powerful enough for US politicians to make driverless cars the subject of attack ads, and while all the evidence says that driverless cars are safer and more environmentally friendly than human-controlled ones, you know it's just a matter of time before one of them slams into a bus full of orphans and puppies and everybody goes crazy. Driverless cars do raise genuine concerns, though. Will robot Audis give cyclists even less space than today's human-driven ones? Will robo-SUVs shoot red lights like human drivers do? Will we have to give electric cars silly noises to stop them from being silent killers?

Geoengineering - messing around with the planet - was initially conceived as a weapon of war, but these days it's being suggested as a cure for climate change. The worry is that geoengineering techniques such as filling the atmosphere with chemicals, covering huge areas with mirrors or chucking stuff into the sea in huge quantities might simply cause more devastation by damaging wildlife, by changing the weather to cause more floods or droughts, or by waking a Kraken.

This is how the world ends:

3D printers aren't just for the nice things in life, or for ripping off big firms' intellectual property. Defense Distributed wants to use them to make the world's first "Wiki Weapon", a fully functional, 3D-printed gun that means governments "must one day operate on the assumption that any and every citizen has near instant access to a firearm through the internet". Because if there's one thing the world really needs today, it's more guns.

As fears go, this one's pretty irrational: robot doctors are already here, and they're helping humans rather than zooming around the place stabbing us to smithereens. According to Popular Mechanics, the Da Vinci robot surgeon has "almost 2,500 units worldwide performing over 200,000 procedures per year". Robot surgeons are more accurate, leave smaller scars and are much less likely to leave their watch inside a patient than real surgeons, and recovery time is shorter too. Systems such as Da Vinci aren't fully autonomous, but that's the long-term goal - and robots don't just want to do the stabby bits. IBM's Watson is being trained to analyse symptoms and provide accurate diagnoses. We hope it's more accurate than Google: whenever we google any symptom whatsoever we end up convinced we've got cancer.