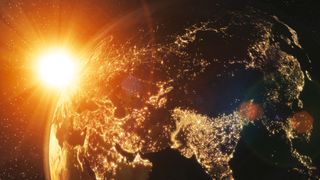 It can take years to win back the cost of installing solar panels, but a novel new solution might actually double their efficiency.

Scientists have come up with a "green" antenna that harvests more of the blue part of the light spectrum (that's the 350 to 600 nm part of the wavelength, if you're interested), a portion that's mostly unused by current cells.

Most solar panels are only around 15% efficient at best, with the more powerful ones usually too expensive for a large majority of people.

The best part is that the materials of these antennas make them theoretically edible. "Not that you would want to eat your solar cells, but they should be compostable so they won't accumulate in the environment," said Challa V. Kumar, whose team found the solution.

This isn't your ordinary-shaped antenna, however. It's actually a thin film that can be coated on top of a solar cell.

"It's very simple chemistry," said Kumar. "It can be done in the kitchen or in a remote village. That makes it inexpensive to produce."