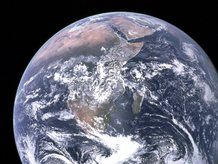 Shenzhou 7 and its occupants wave goodbye to Earth

China is to launch of a manned space mission today according to the Communist newspaper People's Daily. The launch is set to take place in a desert town in north-west China. An eight hour countdown kicked off this morning.

China's space program has been developing fast – this is the country's third trip into space. It should also mark China's first-ever spacewalk.

Footage of the spacewalk – which will embark from the shuttle Shenzhou 7 – will be broadcast on Chinese television, and last up to 40 minutes.

It is unknown which of the three astronauts will set off on the spacewalk. All three are fighter pilots who have been training together for the last 10 years.

The spacewalk is a major step towards creating China's own space station.

China's first space mission was as recent as 2003. Since then it has received help from Russia in training and in equipment, but China has been busy generating its own technology as it looks to explore space independently.