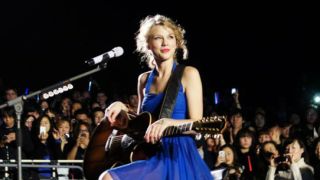 Taylor Swift is one of the many musicians drawn to Jay Z's Tidal, but Apple is reportedly trying to lure her away for some Beats headphones exclusives.

The musician made her displeasure with the popular Spotify known in 2014, but it turns out her catalog might not remain exclusive to artist-owned Tidal.

Swift is in talks with Apple about releasing exclusive content on Beats, reports Bloomberg. Maybe it's an "enemy of my enemy thing."

Other artists Apple has approached reportedly include Florence and the Machine and a dozen or so more, the site's sources said.

In a world where Spotify rules and Tidal is appealing to those who have beef with Spotify, the advantage of exclusive Beats content is clear for Apple - and it might be necessary, if the iPhone maker hopes to topple its competitors.