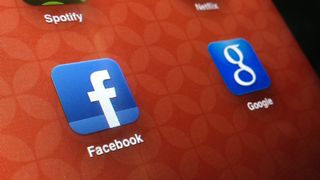 During the company's quarterly earnings call late last week, Zuckerberg spoke of the Silicon Valley playground spat, which has left the web giants on opposing teams.

He said: "Our relationship with Google isn't one where the companies really talk."

Now, this could mean that Facebook and Google don't really have any reason to talk, but given Facey's desperate need to own the mobile space, part occupied by Google, everyone knows that isn't true.

Also, Google CEO Larry Page slamming the social network for "doing a really bad job on their products" would certainly be enough for Facebook to get the hump.

To juxtapose the situation nicely, Zuckerberg claimed he was "really happy with the partnership" Facebook is enjoying with Google's arch-nemesis Apple.

We're not saying Facebook is picking sides, but if Google and Apple were having a sleepover on the same night, we all know where Zuckerberg would be taking his sleeping bag and scary movie collection...