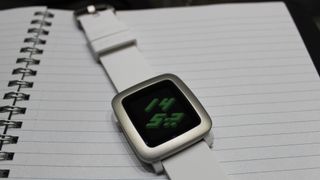 Pebble took the opportunity at MWC 2015 this week to introduce "smartstraps" for its new Pebble Time and Time Steel smartwatches.

The Pebble Time smartstraps are an open platform that will let developers and hardware makers extend the watch's battery life, give it GPS independent of your phone and more, Pebble says.

That's just the beginning, though - both the Pebble Time and the Pebble Time Steel feature a "special port" for different strap accessories to plug into, and the straps can be easily swapped in and out for various needs.

"In order to add a heart rate monitor or GPS directly into a smartwatch, you have to make serious compromises on design and battery life. And it's likely that if you buy a watch with a certain sensor today, it will be out of date within 12 months," said Pebble CEO Eric Migicovsky. "We are creating an open platform that will enable anyone to build smartstraps for Pebble watches."

Pebble will make some smartstraps of its own, while it's also "working closely" with third party accessory makers on others.

They'll begin to arrive "later in the year," the company said in an announcement.