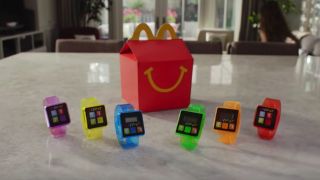 Well, that didn't last long. Just a couple of days after McDonald's announced it would be swapping out its Happy Meal toys for fitness trackers, the company has had to recall them following complaints of skin irritation.

McDonald's had started putting 'Step-It' trackers in its Happy Meals in the US and Canada, as part of a bid to improve its healthy-eating image.

Turns out, the new toy has done quite the opposite: the company said it received reports of potential skin irritations from the bands that have led it to remove the trackers from meals.

For the time being, it's gone back to offering normal toys.

Definitely not lovin' it

While we're all for encouraging young people to exercise, the tracker seemed like an odd promotion for McDonald's to make. What message was it trying to send? "Our food will make you fat, but it's ok because you can work it off afterwards."?

If a Happy Meal has 690 calories (according to the US McDonald's website), a child would have to walk somewhere between four and five hours (or go jogging if they want to shorten that time) to burn that off.

Maybe better to just opt for a different type of lunch entirely.