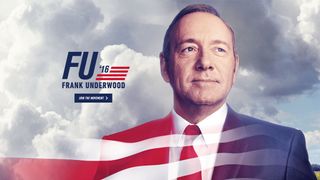 As devious and murderous as he is, it’s hard not to love Frank Underwood – the guy is just so devilishly charming that you almost forget about all the heinous acts he’s committed to secure his place at the top.

Though his snake oil salesman ways might make us overlook his ghastly crimes, the latest trailer for the upcoming fourth season of House of Cards is quick to remind us of his dastardly deeds from the last three seasons.

The trailer, which is once again presented as a campaign video, has Frank describing himself as the leader America deserves, while quick glimpses of his past indiscretions are spliced in for maximum effect.

And, if you look closely, you’ll notice some of the glimpses are for things that haven’t happened yet, giving us our first brief look at footage from season 4 – needless to say, Frank doesn’t seem to have softened since last season.

The new season will arrive on Netflix on March 4, and you can watch the new trailer below.