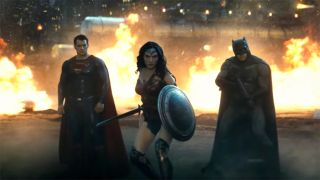 We were treated to an agonisingly brief tease earlier in the week, and the full version of the latest Batman v Superman: Dawn of Justice trailer has finally arrived.

Expanding on that 50-second sneak peak's shock unmasking of an understandably peeved Bruce Wayne by the Man of Steel, the new trailer provides more insight into the relationship between these two superhero titans – seeing Clark Kent prod Bruce Wayne about Gotham's "bat vigilante" is a particular delight, as is Bruce's comeback about "freaks dressed like clowns".

While previous trailers have kept Batman mostly confined to rainy darkness, this new footage gives us our best look yet at The Dark Knight in action, while also letting us hear Ben Affleck's Bat-voice.

We also get a hint as to Lex Luthor's dastardly intentions, and a truly surprising appearance by one of Superman's deadliest and most powerful adversaries – we won't spoil it, so watch the trailer and find out for yourself below!