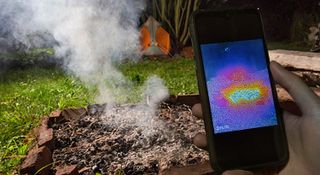 If there’s one smartphone feature that captures everyone’s imagination, it is the thermal camera.

Already available in the likes of the Cat S60 or Cat S61, this feature allows you to generate a colourful image based on the levels of heat source around you.

Until recently though, such a feature was only available either as a standalone product - usually courtesy of FLIR - or on smartphones that were not exactly cutting edge or cheap.

Blackview wants to change that and has taken to Kickstarter, the crowdfunding platform to make it happen. The BV9800 Pro will get a FLIR Lepton thermal sensor as confirmed by the Chinese vendor and at a bargain price.

See in the dark

It is too early to know if it will succeed - the campaign has just started - however given the fact that Blackview is a known name in the ruggedised market, it would be a massive disappointment if didn’t happen. Expect a review of the BV9800 Pro soon.