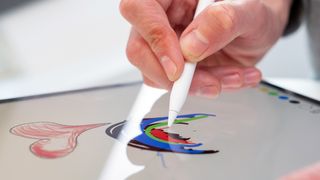 We've seen two generations of the Apple Pencil so far – both of which are still in use on current devices – and a new patent has shed some light on what we can expect with the next version of Apple's stylus.

A new patent spotted by AppleInsider details how a future Apple Pencil could come with support for more gestures beyond the double-tap input that the 2nd-gen Apple Pencil offers.

This would work via a touch-sensitive panel on the side of the pencil where the user's fingertip naturally rests – you could swipe up and down to scroll through webpages, for example.

"[While] the user is holding a stylus or other touch-based input device, the user may be limited to the input options provided thereby," says the patent, so "additional input capabilities" on the stylus would come in very handy.

Writing to reach you

Another way of adding input to the Apple Pencil, as outlined by the patent, could be letting users roll the stylus in their fingers or on a surface to control something on screen.

The patent also makes mention of a camera embedded inside the Apple Pencil alongside the sensors, although this innovative has been mentioned in previous patents too – this could possibly make the stylus more intelligent in terms of knowing what it was writing on.

Support for other devices is mentioned too – including TVs and the Apple Watch – but again this has been mentioned in Apple Pencil patents in the past.

As always with patents from any tech company, there's no certainty about when we'll see this new features appear, if they ever make it to the Apple Pencil at all, but they do give us an idea of what Apple is experimenting with.