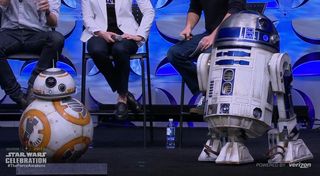 The two most lovable droids in the galaxy.

The droid and its creator took to the stage early Thursday morning at Star Wars Celebration Weekend in Anaheim, Calif. to upstage our favorite astromech unit and give the audience something to cheer about.

When asked why so much effort went into making a real robot instead of solely using CGI to create one on-screen, director J.J. Abrams said, "that it would be better for the actors to have something to interact with," rather than having empty space in front of them.

On closer examination, the newly debuted droid had some unique, almost gravity-defying features. The head - which is similar to R2's - seems to float on top of the rolling base, which can move 360 degrees.

While there's still a lot we don't know about this generation's programmable comic relief, we can at least confirm that it is indeed real and not a figment of Abrams's imagination.

Want to learn more about the galaxy far, far away? Check out our Star Wars: The Force Awakens hub!