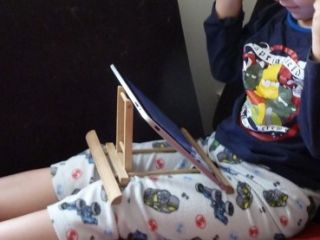 iLapStand - available in wood or aluminium

A British inventor is selling a specially designed stand for iPads after deciding there was nothing on the market that helped his kids to use the Apple tablet.

Richard White told TechRadar that he came up with the design for his iLapStand after watching the way in which his kids used his iPad.

"When I bought my iPad it was mainly to understand how this new type of handheld device was going to impact on my children," said White.

"The iPad was an instant success but it became apparent that there was a flaw - If you use it for more than about 30 minutes your arms get tired.

"I searched long and hard for a stand that would sit comfortably and remain stable on [my child's] lap but that was also fully adjustable so that you could position the screen for best viewing but found nothing because most stands were designed for a desk."

White decided that cases did not allow for easy rotation, so he designed and built his own stand – and is now selling them at http://www.ilapstand.com