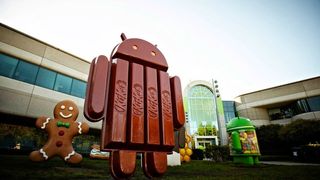 Android 4.4 KitKat continues to grow in use, now accounting for 8.5% of all Android devices, according to Google.

The company measures OS usage numbers by collating the devices that access the Google Play store through the latest version of the app, and releases its findings in monthly reports.

Using this technique, Google can tell that KitKat is now on almost a tenth of devices counted. Jelly Bean still has the majority by far with a total of 60.5%.

Meanwhile the older Gingerbread - top of the list just two years ago - is still on 16.2% of devices, and Ice Cream Sandwich has 13.4%.

Everyone gets a piece

Bear in mind that Google's process does not take into account devices like Amazon's Kindle Fire line, which use Amazon's app store, or the Nokia X, an Android phone filled with Microsoft bric-a-brac.

Regardless, it's clear that KitKat is gaining speed at a respectable clip; its usage has jumped from just 2.5% in the past two months.

There are two factors to thank there. KitKat is rolling out steadily (if slowly) to existing devices, and more new flagships are launching with the latest Google OS built in.

Those new devices include the HTC One (M8), Samsung Galaxy S5 and Sony Xperia Z2.