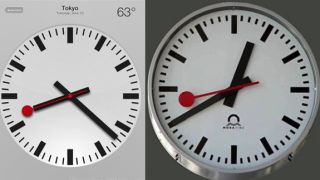 Nice payday for the Swiss

Apple has reportedly shelled out a whopping £13 million (USD$21, AUD$20) to license the clock design for iOS 6.

The clock was designed by an employee of the Swiss Federal Railway service in 1944 and has been used in train stations around the country ever since.

Following the launch of iOS in September, the network complained that Apple had used the identical design, once honoured by the Museum of Modern Art in New York, without permission.

"We're rather proud that a brand as important as Apple is using our design," said a spokesperson for the service back in September.

A month ago, it was revealed that Apple and the Swiss had come to terms on a licensing package, although the details remained confidential.

Now a report from French news agency AFP claims that Apple coughed up a £13 million lump sum for permission to use the clock in iOS 6.

Surely, that has to be the most expensive clock ever?