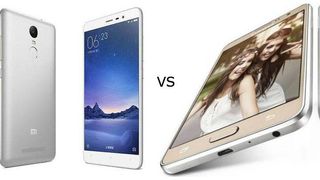 The Xiaomi Redmi Note 3 is considered a veteran of the mid-ranged mobile market. The handset was announced some months ago and has dominated the market segment thanks to a perfect blend of hardware, software and pricing.

Understandably, companies like Samsung also want a piece of the pie and have tried launching several handsets to counter Xiaomi offerings, but to very little success. The company is trying to do this yet again with the Galaxy On7 Pro, which was announced just a couple of days ago as an Indian exclusive. So does it hold its own against the Redmi Note 3 or is it just another overpriced budget device? Let's find out.

As for the hardware, Xiaomi is using a premium metal unibody design as mentioned above. The attention to detail is quite apparent here. Samsung's offering, on the other hand, uses a polycarbonate exterior, which isn't necessarily a bad thing as it would add durability to the device, especially with drops as well as the usual wear and tear.

The Redmi Note 3 comes with the Snapdragon 652 six-core processor, while the Samsung offering is content with the relatively old Snapdragon 410 quad-core processor. No marks for guessing which one comes out on top here.

Customers will find a massive 4,050mAh battery with the Redmi Note 3 while the On7 Pro is settling for a 3,000mAh unit. Both are pretty decent, but clearly, the Xiaomi offering has an upper hand here in terms of usage and standby times.

The Galaxy On7 Pro is only available in one model which is priced at Rs 11,190. Unlike the Redmi Note 3, the On7 Pro can be bought from a variety of retailers (not just online) and stocks shouldn't be a problem either.