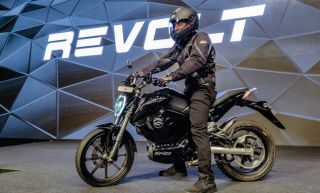 The RV400 by Revolt Intellicorp is one of the most anticipated 2-wheelers in a long while. It seems like that wait is about to get over soon as a final launch date has been set - August 28.

This final launch date comes via Financial Express and the event is also expected to elaborate on specifics such as the price, final range, internal specifications, charging network and other relevant information which the consumers have been waiting for.

Back in June, Revolt had a small unveiling event where the RV400 was shown, and some of the features were showcased. However, a lot of questions were left unanswered. The all-electric bike was open to pre-orders where patrons in Delhi and Pune could reserve one for just INR 1,000 via Amazon India. Some 2,500 people already pledged their interest in the EV which should begin shipping later this year.

RV400 Line off Ceremony - We're proud to share the rollout of the 1st #RV400 from our plant in Manesar. Countdown has begun, mark your calendar! August 28th is our commercial launch of India’s 1st AI-Enabled motorcycle. Stay tuned for more details. #JoinTheRevolt pic.twitter.com/wJn3a2ix39August 7, 2019

So what does India’s first AI-enabled electric motorcycle offer?

The Revolt RV400 isn’t just on its way to being India’s first electric bike, but will also come with features and related services that are going to put it ahead of the competition. It has an ARAI (Automotive Research Association of India) certified range of 156 km on a single charge. It runs on lithium-ion batteries which are subject to government subsidies that should bring the bike’s price down. Since the original unveiling, the GST on electric vehicles has been brought down to 5% from 12%.

The Revolt RV400 has a top speed of 85 km/h in the Sport mode. There will also be an Eco and a City mode for better range. These settings can be toggled from within the app, which also has options to order batteries and change the exhaust sound.

Speaking of batteries, Revolt Motors plans on offering Mobile Swap Stations where riders can come and get a new, fully charged battery in just a few minutes. Along with that, the battery can also be detached and taken to any regular charging point, with the supplied charger taking about 4 hours to charge at an output of 15 Amps.

During the last presentation, Revolt’s CEO Rahul Sharma mentioned “We haven’t even unveiled 25% of what the RV400 can do!”, and ended the event with a teaser that pointed at voice control for the bike.

Even with such little information available around the bike, it is already shaping up to be one of the most exciting vehicles to hit the Indian roads in near future.