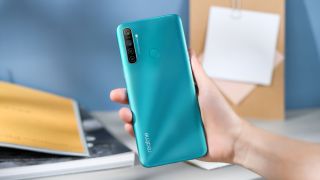 With the turn of the year, Realme is back with another budget smartphone launch in India, this time with the Realme 5i, which will replace the Realme 5.

The Realme 5 series was launched in India in August 2019, with all of them adopting a new design language as well as sporting quad-cameras. As the trend with budget smartphones has always been, Realme refreshed the 5 with the new Realme 5i, bringing most of the same specs to an even lower price tag. Going forward, the Realme 5 will be discontinued, and stocks will not be replenished. The 5i will take its position.

The Realme 5i is thus a very similar smartphone. At its heart is the 11nm octa-core Snapdragon 665 AIE chipset with 4GB of RAM and 64GB of storage.

The front is the same, with a 6.52-inch LCD with a mini drop notch for the selfie camera, and has HD+ resolution. A new sunlight display technology is supposed to improve outdoor legibility. The back, however, gets a facelift with a new “sunrise design,” which brings a glossy polished texture to the curved back, instead of the diamond-cut pattern on the Realme 5.

The Realme 5i retains the same quad-camera setup consisting of a 12MP primary camera, an 8MP ultra-wide shooter, a 2MP depth sensor and a 2MP macro lens. EIS is available for video shooting with both, the primary as well as the ultrawide cameras. 4K capture and 240fps slow-motion also make the cut. The front camera uses an 8MP sensor.

The battery is rated at a hefty 5,000mAh, which also supports reverse charging (via OTG) to make the most of this big battery.

Realme 5i price in India

The Realme 5i is available in a single 64 + 4GB configuration, and is priced at Rs 8,999. The first sale is on January 15 on Flipkart and Realme’s website. Colour options include Forest Green and Aqua Blue.