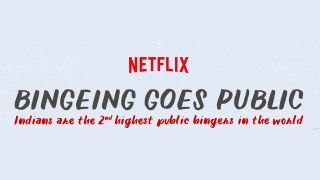 It’s going to be two years in January 2018 since Netflix set its foot in India and has garnered more than 4 million subscribers. Bingeing has officially become a part of the Indian lifestyle and it’s growing at an exponential rate. On Tuesday, Netflix announced that Indians are the second-highest public bingers in the world with 88 percent subscribers. Public bingeing is a kind of activity wherein a person binge watches anytime during the course of the day. Indians have day-by-day started adapting to bingeing in public and are pretty chill about it.

As much as 71 percent Indians have taken the plunge and started bingeing in public from last year. Netflix also revealed that when it comes to preferences during the commute, public binge watchers rank access to movies and shows higher than food and water.

Netflix conducted this survey in collaboration with SurveyMonkey and its findings are based on 37,056 responses.

As much as 65 percent of subscribers watch their favourite movie or show while travelling by train whereas when travelling via buses and flights, that number drops to 58 percent and 52 percent respectively.

Now, public bingeing obviously attracts the attention of other consumers looking at what a person is watching on his smartphone over their shoulder. According to Netflix, almost 50 percent of public bingers have been interrupted by other commuters asking them about what they were watching.

As a matter of fact, one in two Indians downloads their binge for their daily commute. That’s not all, over 72% Indians have laughed out loud, 26% have cried in public, and 29% have jumped out of their seat in surprise while watching something on their smartphones.

Going by these numbers it's apparent that Indians now don’t mind bingeing in public and the trend is growing faster than ever. OTT services such as Netflix, Hotstar and Amazon have penetrated into the entertainment market with much ease and have found solace into the daily lives of its subscribers.