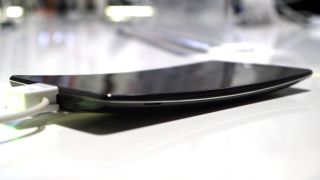 Expecting more? Blame it on suppliers.

LG may have bent over backwards to bring the world flexible smartphones, but when it comes to further innovation on current form factors, the Korean manufacturer shrugs off any notion that something cool is on the immediate horizon.

TrustedReviews today published curious comments from an LG executive that shed light on why new handsets like the LG G Flex 2 might be about as cool as smartphones get for the time being.

LG Director of Corporate Communications Ken Hong summed up the dilemma by proclaiming, "I don't think we can do much with form factor beyond this at this moment," adding "the design of phones is restricted by the technology of our component suppliers."

In fact, even a device like the G Flex 2 is ultimately hindered by how fast suppliers can assemble the handsets, and the more complicated they become, the worse the problem seems to get.

Hong dismisses the notion that smartphone makers will be able to do much innovative work this year, claiming advances like transparent or flexible displays are simply not "commercially viable technology at the moment."

Such comments certainly don't mean that LG is waving a white flag over smartphone form factors, especially when all of the companies at the Korean manufacturer's disposal are "likely to come up with something cool to do before someone else does."

"We're willing to develop something new, like OLED, look at all the money we've put into OLED, without a single order. We're able to take those risks and make those investments as a larger company," Hong elaborated.

So when will suppliers finally catch up to the ambitions of manufacturers? LG suggests truly bendable hardware could be only two or three years away, at which point smartphone designs should get interesting again.