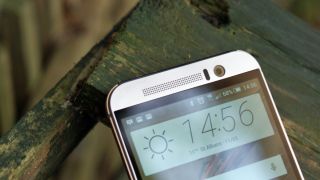 A bigger and better version of this could be just a week away.

If there was any doubt that we'd see the HTC One M9 Plus on April 8 those fears have now been quashed, thanks to a newly leaked selection of promo shots, which appear to show the M9 Plus alongside the words "Beijing, April 8 2015".

We already knew HTC was holding an event then and we theorised that the One M9 Plus would be the star of the show.

But there's also the HTC One E9 and E9+, so it could have just been focused on them, however these promo shots strongly suggest otherwise.

Can you tell what it is yet?

The images, leaked by MyDrivers, focus on several design elements of the phone. One is a close-up of the home button, a feature that's long been rumoured for the M9 Plus and would only really be needed to house a fingerprint scanner, which is also strongly suspected.

Another image seems focused on the dual-tone colour scheme and metal shell of the phone, two features inherited from the HTC One M9 which suggest a premium handset.

Finally there's a shot that's simply focused on the screen, which could be designed to hint at a QHD display, as that's something else that we've heard the HTC One M9 Plus might have.

Sadly none of the images give us a full unobstructed look at the phone, but with an announcement set for April 8 we should get one in under a week.