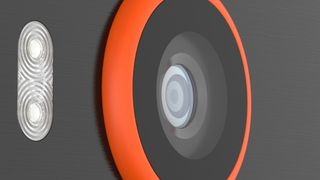 Mega Pixels: camera detail from the One M8 Prime

The HTC One M8 Prime leaks are coming thick and fast, and today we've been treated to a 360 degree revolving render.

It comes from everybody's favourite phone leakster, @evleaks, and doesn't give much away beyond the fact that the camera module now has an orange ring around it and protrudes from the back of the phone.

That suggests that new camera hardware is afoot, which means we may see an improved snapper over the original One M8's dual 4MP camera which we already think is pretty impressive.