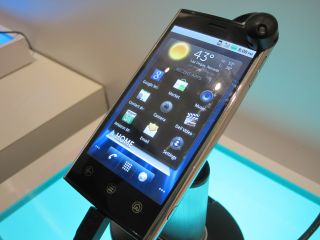 The Dell Venue was announced at CES today

Dell took the wraps off its Venue smartphone at CES today and we've had a play with it.

The new handset is similar in basic styling to the Windows Phone 7-toting Venue Pro, but this new model is Android 2.2 all the way.

It seems like a great Android handset to us, even if it's lacking some of the killer specs we've seen elsewhere at the show. It'll be interesting to see how it's priced – as well as how it will stack up alongside what'll be launched at next month's Mobile World Congress.

The new handset feels extremely pleasant in the hand. It's really nicely styled with metallic sides and curved ends – surely the best looking thing Dell has yet produced.

The front is the best; the Venue has the same curved glass screen as its older brother and, again, is a 4.1-inch OLED screen.

It didn't seem as bright as it should have to us, even if we struggled with various reflections as we photographed it in Dell's suite here at CES. However, the clarity is excellent.

The screen also features the same Gorilla Glass used in the Dell Streak variants as well as on Microsoft's new Surface. At last night's keynote Microsoft said you can drop a beer bottle onto Surface and it still won't break but, mobile phones being what they are, we doubt it will be long before someone breaks this one.

So what else does the Venue offer? It's nothing extraordinary – there's an eight-megapixel camera as well as a 1GHz processor. Details on the processor are sketchy, but we'd bet on it being the same Qualcomm Snapdragon ARM-based chip found inside the Venue Pro.