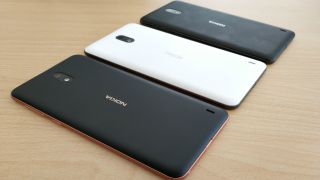 The Nokia 2 has just been announced in India and it’s set to slot in at the bottom of the new HMD Global-built Nokia range, but with a surprisingly big battery it could have more going for it than just a low price.

The Nokia 2 has a 4,100mAh juice pack, which is bigger than the batteries in most phones at any price. The massive Samsung Galaxy Note 8 for example has just a 3,300mAh one, and HMD Global claims the Nokia 2's battery will allow for up to two days of life on a single charge.

It remains to be seen whether that will be true or not, but the otherwise modest specs of the Nokia 2 should help, as it has just a 5.0-inch 720 x 1280 screen, a 1.3GHz quad-core Snapdragon 212 chipset, 1GB of RAM, an 8MP rear camera, a 5MP front-facing one, 8GB of storage and a microSD card slot.

The power does concern us though. Performance of the more powerful Nokia 3 didn't exactly impress, and with less RAM and an entry-level chipset in the Nokia 2 we wonder how well it will perform on screen. One of our team members attended the launch event who tried his hands on the phone, according to his initial experience with the Nokia 2, the phone lacks power and was showing signs of lags at at the launch itself. The brand must be aware that only the mighty battery itself cannot suffice the needs of a budget phone user.

Nokia has not yet announced the exact price and availability details of the Nokia 2 but we expect it to be priced somewhere around Rs 6000. It is expected to be available in India from around mid November.

Looking at the competition in India, Nokia 2 specifications are a little conerning as we already have phones like Moto C and Redmi 4A doing well under this price segment. But there are some notable points beyond the battery life. It’s clad in aluminum for one, giving it a potentially better look than some budget phones, and it runs a stock version of Android Nougat, with Android Oreo confirmed to be arriving on the Nokia 2 at a later date.